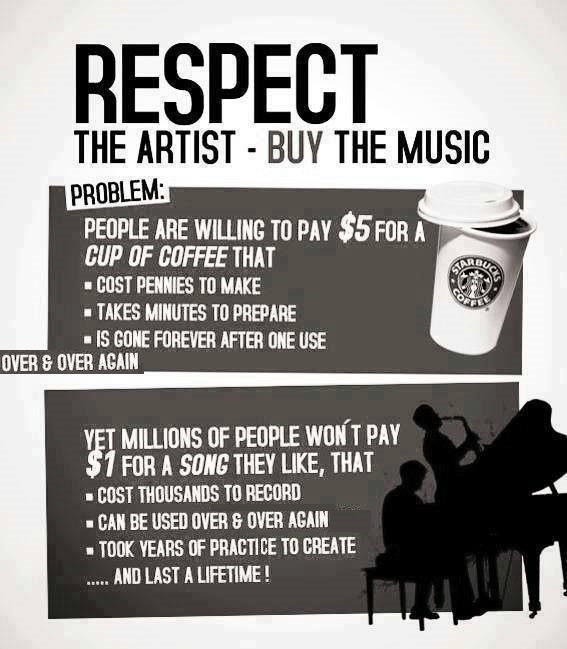 "Legalized theft / Leaves me bereft". This excerpt of the lyrics from the merciless Morrissey song "Sorrow Will Come in the End" does not apply to my situation, but to all artists whose copyright rights are not respected and who are not getting paid for what is rightfully theirs. "Thou shalt not steal" is one of the Ten Commandments, but sadly a moral imperative in dissolution. Even swedish politicians wavers in this matter. Our resigning Prime Minister from the Moderate Party (right-wing) said: "We can't criminalize a whole generation" and later elaborated his thoughts: "We can see that the technical possibilities now exist and that we can't chase a whole generation of young people for doing something that is super easy and we don't have judicial resources to correct". This statement comes from a leader of a political party well-known for their hard attitudes in property law. Let's examine the logic. Could you imagine him say: "We can see that burglary methods have improved lately and that we can't chase people for breaking into homes and stealing things and we don't have judicial resources to correct". Personally, I don't think so. This kind of unbridled populism is not limited to this particular party. The Liberal Party, the Christian Democrats and the Centre Party (right-wing parties) are all on a slippery slope when arguing that copyright "must be adapted to technological changes". What this mean is very unclear. Copyright is however not an right-left issue. The Green Environmental Party (left-wing party) is flirting openly with former Pirate Party voters (who wants to re-establish a "balance" in copyright law) when they argue that "copyright inhibits the emergence of new culture and creates unreasonable consequences for ordinary music consumers". However, they are unable or unwilling to elaborate what they mean. The only political parties that stand up for copyright is the Social Democratic Party and the Left Party (left-wing parties). But, what can you expect? As I wrote in a blog post a couple of weeks ago, see link, politicians and music don’t go well together. It may be appropriate to end this blog entry with a greeting, to those who don't respect the artist and steal their music, in form of a quote from the above-mentioned song: "But Sorrow will come / To you in the end / And as sure as my words are pure / I praise the day that brings you pain".

Note: The song "Sorrow Will Come in the End" refers to the law suit where drummer Mike Joyce sued Johnny Marr and Morrissey (the Smiths) for an equal share of performance and recording royalties. Joyce won the case (wrongly, of course).