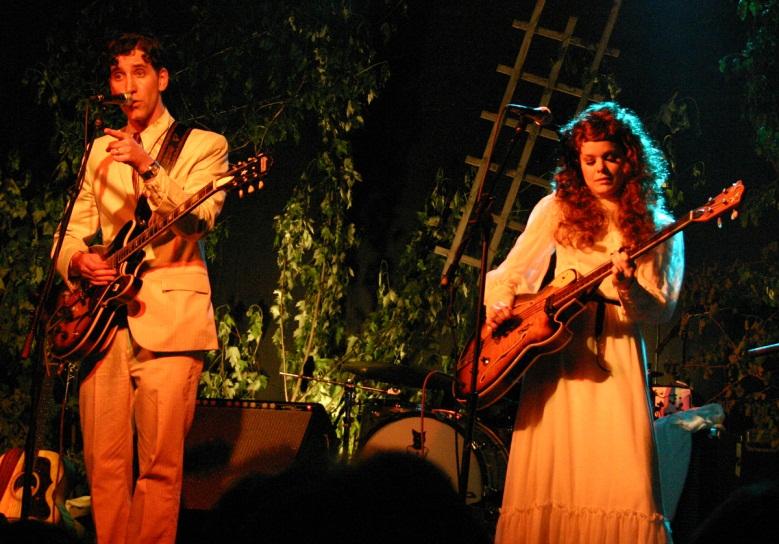 Blanche is a band from Detroit, Michigan, see website. The website is well-designed and (still) state of the art. You can also find their mission statement here: "To create, maintain and extend throughout the community high standards of musical standards". This is a pretty good mission statement for a band, isn't it? Blanche was formed in 2002 by the married couple, Dan John Miller (guitar and vocals) and Tracee Mae Miller (bass and vocals). Dan John Miller has a background in the country-punk band Goober & the Peas and together with wife Tracee Mae in country-garage band Two Star Tabernacle (with Jack White, later in White Stripes and Damian Lang, later in Detroit Cobras). Blanche also includes Davy Feeny (pedal steel), Lisa "Jaybird" Jannon (drums) and Brian "Patch" Boyle (banjo and autoharp). The latter was replaced by Little Jack Lawrence after a couple of years. Blanche can be likened to the "gothic country" counterpart to Roxy Music. Blanche's music is extremely varied, refined and well- but never overproduced. The comparison to Roxy Music also applies to style and appearance. Other bands in the genre may look a little ragged out, long-haired and, by any standards, heavily tattooed. But this is not the case here. The band's dressing style is classic vintage from an earlier decade (1920-1930). The dressing style may be old-fashioned, but it's still modern "gothic country" of the finest brand.

Blanche has been labeled as "Gothic indie-country-folk medicine show revivalists". Labels can however be deceptive. The label may have reference to "included, but not limited to" this genres. Blanche is full of talent, which showcases itself in gifted songwriting, instrumental skills, ironic and witty lyrics and beautiful choirs and vocals. Dan and Tracee sing alternately in beautiful harmonies. The music is highly banjo-driven with interacted accompaniment of pedal-steel, guitar, bass and drums. Blanche doesn't have the same raw expression that many other bands in the genre have. In music skill terms, Blanche definitely plays in a higher division, but skill is not the only or the most important parameter in the "gothic country" community. However, in this case skill is matched by a pure, authentic and non-pretentious "gothic country" attitude, which makes Blanche one of the most interesting bands in the genre. On their homepage they state that: "The melodies trick you into singing along with tales of superstitions, garbage picking, fading trust, and feelings of lost hope." The lyrics are both mundane and bleak stories. For example, in the song "So Long Cruel World":

Blanche has released two albums. The debut release "If We Can't Trust the Doctors..." (2004) and the sophomore release "Little Amber Bottles" (2007). They are both very good in terms of arrangement, musical standard and sound quality. If We Can't Trust the Doctors... is a masterpiece. It's brilliant and exquisite. Blanche can however surprise you. Embedded in the last song Someday (after about 30 seconds of silence) is Blanche's version of Van Halen's song Running With The Devil (barely possible to discern), but with the important addition: "I was running with the Devil but Jesus has called me back home".

What does the future hold for the band? To my knowledge, the band has not been disbanded, but the activity seems to be rather low. No record since 2007, no concert the last couple of years that I have been able to ascertain and no activity on their website, Myspace or Facebook. They all seem to have stopped in time. On the other hand, "social media ain't country", but the lack of activity indicates either a very long term hiatus or a still asleep. In both cases, Blanche has contributed greatly to the "gothic country" genre. And that is all that really matters (at least for me).

Below is a suggestion for a CD compilation containing the best of the two albums (in chronological order). If We Can't Trust the Doctors is represented in its indivisibility and entirety (yes, I have come to the conclusion that it's justified in this case).

Best album: If We Can't Trust the Doctors...