Blackgrass is a band from Knoxville, Tennessee. Blackgrass means (juncus gerardii). When you seek information about Blackgrass on the Internet both pesticides and other bands comes up. Blackgrass (not to be confused with other bands with the same name – this article refers to Artist ID P 706612on ALL MUSIC GUIDE) was formed in 2001 but was disbanded after only three years. See their website. I discovered Blackgrass under my triangulation of the "gothic country" genre. In an unusual well-informed thread on a forum "Jackie Blue" provided suggestions of both well-known (Sixteen Horsepower and Woven Hand a.k.a. Wovenhand) and lesser known artists/bands (Rex, Blackgrass, Lift to Experience and Black Heart Procession). I was already familiar with Sixteen Horsepower and Woven Hand, but all of other suggestions I have "Jackie Blue" to thank for.

The labels ”jazz grass”, “banjo rock”, ”postapunkalyptic”, ”goth-twang” and ”appalachian punk” are used in conjunction to Blackgrass. How shall I describe the music? Well, if you removed the banjo and fiddle there would be country-rock left. However, with the banjo and fiddle (which also gets a lot of space), it becomes "gothic country". And a very solid type, I might add. A music reviewer has described the style as [Blackgrass]: ”uses traditional instruments in nontraditional ways”. The banjo and fiddle lingers each in separate loops, but harmonizes extremely well together. The banjo “plinks and plonks” at the same pace and rhythm as other instruments, while the violin rubs slowly bluesy harmonies more reminiscent of East Europe than how violin traditionally is played in U.S. The vocals is - with "gothic country" standards - very good. The vocals are dark and clear. This means that you can hear the lyrics articulated properly. The lyrics are not quite as Old Testament-like and sulphurous compared to the lyrics of 16 Horsepower, but the religious references are always there.

The lyrics are dark and gloomy (as it should be), sometimes with a bit of witty irony for example in the song Good Sings the Blues with reference to Psalm 23:4. “Yea, though I walk through valley of the shadow of death! I will fear no evil I’ve got a shotgun with a pistol grip.”

The band consisted of Joshua Hurston Hall (banjo and vocals), Scott Alan Trowbridge (bass and vocals), Christian Lange (violin), Roman Karpynec (drums and vocals) and Kevin "CrookedLegs" Walford (guitar and vocals). When they were not musicians, they were hospital employee, photographer, social worker and actor/filmmaker. Blackgrass has made two albums, however with 10 years apart (!). More about this entirely implausible story below.

Their first album "13" (2003) was self-released. Blackgrass had during this time, access to a basement studio and was able to record and mix the album in their own pace. The release party was held at Preservation Pub in Knoxville, Tennessee on April 26 2003. The album consists of 13 tracks, 11 own songs and two traditional ones (one of them is "Wayfarin Stranger"). A lot of effort has also been put into the album cover. How about a weeping cherub-like figure with butterfly wings (!). Very "gothic country", indeed. The inlay is also tastefully designed. The album cover was designed by Daniel Martin Diaz, see website.

Unfortunately, Blackgrass does not exist anymore. On July 18 2004, the band played their farewell concert at Barleys in Knoxville, Tennessee. Blackgrass disbanded without any drama. Trowbridge moved to Washington DC to study and started the American Sinner. Lange started a new band (Swing Shoe Revival - today Swing Booty) and Walford quit the band to concentrate on becoming a parent. Joshua Hurton Hall plays nowadays in The Human Aires. Well, well. Everything does not end in suicide, abuse or discord in the "gothic country" world.

But what happened later? When I was in contact with Scott Trowbridge regarding the article about American Sinner, he sent me a second (!) cd with Blackgrass. In the email, he wrote:"I also included a second Blackgrass CD, so you'll have the whole collection. This had been recorded 10 years ago, right before I moved to Washington, D.C. and we had never finished it due to random stupid things. We got asked to play a reunion show earlier this month and finally finished it." 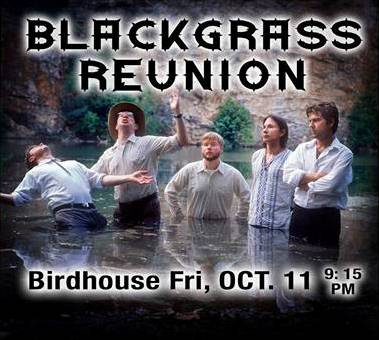 Hitherto is the poster for the "one time only reunion concert" held October 11, 2013 at "The Bird House" in Knoxville, Tennessee (I believe the Baptist-inspired photo is of older date). The band Biscuitheads opened for Blackgrass on the reunion concert. If I have understood the facts correctly then Kevin Walford flew all the way from London to attend to the concert. According to unconfirmed information the band rehearsed for almost six hours the night before the reunion concert. The second album is called "Hope" (2013). "Hope" is recorded in Yahrr studios. The second album is also self-released. It’s not clear (at least for me) who made the very stylish album cover. "Hope" is at least as good as "13". There is an incredibly good version of the traditional murder ballad Knoxville Girl on the album. If we indulge us in some meaningless counterfactual reasoning: what would have happened if "Hope" had been released in 2003 and the band continued together? Had there been any justice (justice is however something that is greatly lacking in the genre), the band certainly would have had some success. Waywardness, creativity and musical skills are indications in that direction, but it's just a speculation on my part. But I actually think I know what I'm talking about after listening to a hundred bands in the genre and dismissed almost all of them. As I stress in other articles authenticity A and O. If you don’t have authenticity then it’s inevitable goodbye (sooner or later). In the fall of 2015 Scott Trowbridge and Joshua Hall (who recently moved up to Washington, DC) started a new band, The Foglings. According to Scott Trowbridge it’s not ”gothic country” or even country at all. Instead they are going full rock. But, they are probably going to do a couple Blackgrass songs in a very different style. You can listen to The Foglings here. Sounds good!