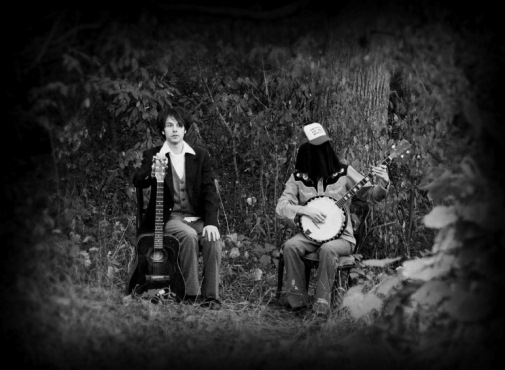 Those Poor Bastards (hence TPB) is a band from Madison, Wisconsin, see website. Their website is exemplary well-designed and functional. At some point in time there must have been a nuclear fallout over Wisconsin that mutated the DNA. A disproportionate fraction of all talented artists/bands in this articles series are namely from Wisconsin. TPB is no exception. But, it’s perhaps best to begin this article with a caveat. TPB is not for everyone. In fact, it’s very far from for everyone. The band consists of Lonesome Wyatt (guitar and vocals) and The Minister (banjo, bass, percussion and vocals - studio only), and Vincent Presley (drums and moog – live only). Lonesome Wyatt - who is extremely active and does not seem to have any problems with activating himself - also appears solo under the name Lonesome Wyatt and the Holy Spooks (see below). Those Poor Bastards is tantamount to Lonesome Wyatt. The Minister doesn’t want to appear in public or even show his face. For this reason he wears a burqa-curtain like mask. Who knows, maybe he is a teacher and don’t want to be bothered with questions and explain to his students why he is a member of TPB and plays the most extreme and hardest "gothic country music " in the world history. The style is sometimes called "death country". TPB refer to themselves as: "Prophets of the Country Doom". I completely agree with this self-assessment. If you want to go further in the labeling then TPB is (evil doom/death country) compared to Sons of Perdition, which is labeled (apocalyptic doom/death country).

I have tried to find out some basic facts about TPB, but it’s really not that easy. I haven’t even been able to establish when the band was formed. TPB has the intention to keep their secrets and they succeed in their intent. Thus, I have to settle with the facts the band want to convey to the rest of us lost souls. The limited facts that are mediated are, on the other hand, both interesting and very amusing. On their website they introduce themselves in the following way: "Those Poor Bastards play miserable and primitive old-time gothic country music ..... If you're looking for slick, over-produced, commercial songs, you'd better cover your delicate little ears. Those Poor Bastards play it raw And they play it mean." This is not an understatement. If this distinct declaration doesn’t discourage you from further listening, the band has been kind enough to place a second warning. In their first song “Raw & Bleeding” (only 21 seconds long) on the first album, they declare: "I'm warning you friends, this is not the sanitized, safe, and clean as the neighborhood ball country bullshit you're used to No, this is country music as it was meant to be , raw and bleeding." There are, however, no "Parental Advisory: Explicit Content" stickers on the albums in spite of the fact that TPB deserves several so-called "Tipper stickers". Their albums are namely released on their own record label Tribulation Records which don’t take any notice of the cowardly commercial recording industry (RIAA). Artistic integrity is a very nice feature. With your own record company you avoid a lot of nonsense. 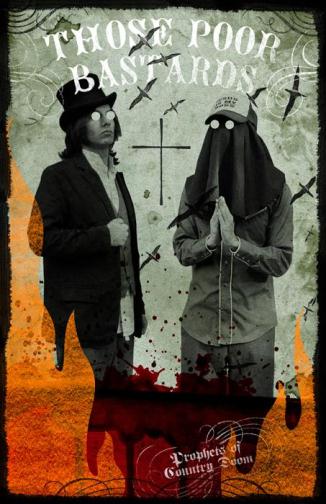 The music is very simple and stripped down. Often, just a few simple chords, “plink-plonk”-sounding guitar and banjo and adroit bass lines from The Minister. It’s really not easy to describe the style. The word dark can probably to some extent contribute to describe their style. Lonesome Wyatt and The Minister are two convinced misanthropes but it’s when the vocals starts the TPB concept - in all its twisted glory - becomes perfected. Lonesome Wyatt sings, yodels, hums, murmurs, howls and screams through the explicit lyrics. The lyrics are a story in itself. There’s not much hope (if any) that TPB - acting as spokesmen for the damned - has to offer to us. The lyrics are very dark. But what can you expect from a band that writes songs about their great interests, which in turn is murder, God, hopelessness and death. Other common themes are lost faith in God, repentance, punishment and regret. The Bible is always present. In short, it is Heaven and Hell with a strong emphasis on the latter. However, the TPB concept is at the same time very entertaining. Somehow they manage to combinate- while maintaining credibility – their sulphurous message with ironic winks and nods. TPB is dead serious and authentic. Believe nothing else. As stated in the introduction to this article series to be authentic is very important in "gothic country". It’s a good idea to be a little suspicious when you’re googling around and botanizing in the "gothic country" genre. The genre is unfortunately not entirely exempt from “gothic bands” who think that all it takes is a spectacular band name, mannerisms and semi talent to blend in among authentic "gothic country" bands. It’s definitely inadequate. The judgment and scorn will be merciless. When I first began to listen to TPB I thought it was a bit "over-the-top" for my taste. But after a while I gave up and surrendered. They simply ran me over with their raw and bleeding music.

Below is a suggestion for a 3-CD compilation. You can fit a lot of TPB-songs on a CD, since what TPB have to say in a song is said in about three minutes. As a listener, you also need to catch your breath. Their relative short songs works in both ways.

Best songs: Black Dog Yodel, The Dust Storm, A Curse, The World Is Evil, I Walk The Line, The Bright Side, Glory Amen, Everything Is Temporary, Born To Preach, Trouble At Home, Forsaken By Satan, Vengeance Trail

Lonesome Wyatt and the Holy Spooks 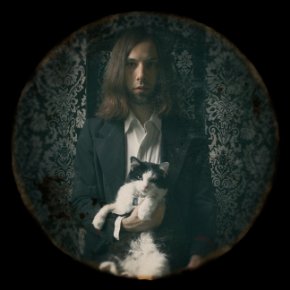 Lonesome Wyatt is the driving force in TPB. Besides TPB he has a solo project under the name Lonesome Wyatt and the Holy Spooks (hence LWatHS). Like the TPB, LWatHS has a "mission statement": "strange , sad music from a time that never was." The mission statement is obvious slightly more restrained compared to TPB's "Prophets of the Country Doom" and also highlights the difference between TPB and LWatHS in an adequate way. However, Lonesome Wyatt is TPB and vice versa. It may seem a bit schizophrenic and problematic. Who should release what and why? However, Lonesome Wyatt has no problem to decide whether it’s TPB or LWatHS. Lonesome Wyatt has often already a recording project in mind when he starts working. TPB and LWatHS are quite different in terms of style and lyrics. Lonesome Wyatt collaborates occasionally with other artists such as Rachel Brooke, Hank Williams III, Joseph Huber and Sons of Perdition. But, he appreciates solitude and prefers to write and record songs at his home in Madison, Wisconsin (also called Nowhere, Wisconsin). LWatHS is not for everyone; which is not surprising. LWatHS frighten people by other means than TPB (which is much more bombastic), namely macabre stories in the style of short stories by Edgar Allan Poe. All this is accompanied by strange music. 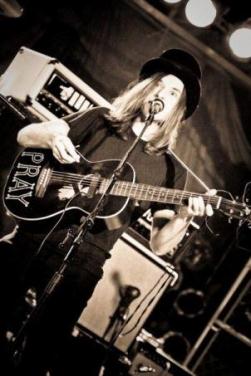 LWatHS has released six albums. The first album was released back in 2001 (NB, three years before the first TPB album was released). It took eight years until the sophomore album was released. The albums are "Sabella” (2001), “Moldy Basement Tapes” (2010), "Heartsick" (2012), “Ghost Ballads” (2013) and "Halloween Is Here" (2013). I have, of course, all the albums. They are quite different within the defined frame LWatHS is working.”Sabellla” contains three great songs: "Black Is The Color" (even the title is great), "The Ballerina's Twirl" and last but not least "A Lovely Coffin"). The latter contains the beautiful lyrics: "If I were dead you'd be my coffin, To rest my weary body inside". "Moldy Basement Tapes" is a triple-cd (!) and is, by far, the most inaccessible of all albums. The album was recorded on four channels under simple conditions. Lonesome Wyatt writes in his liner notes: "These surreal, dream-haunted songs were recorded in my parents' moldy basement between the years 1998-2000. The house was surrounded by acres of crooked cornfields and we lived in a state of almost complete isolation. As I listen to these tapes again, I realize this music could only been created in that strange time and place. They have a pleasant stench of rural solitude and decay, which I can only hope to someday recapture. Thank you to my brother for holding on to this tapes when any sane person would have destroyed them long ago. All of the hiss, noise and defects from the original recordings have been retained for your listening displeasure. Beware!" After listening to the triple-cd I’m overwhelmed by a feeling. This feeling strongly confirms what I have suspected for a long time, namely that Lonesome Wyatt was equipped with a very strange originality as a young man which he further developed as an adult. There is no anxious glancing sideways, only a consistent implementation of his ideas from A to Z. A triple-cd with his early recordings will, however, make you a bit weary after a while. The fourth album "Heartsick" is also a very good album and begins very elevated with the song "All I See Are Bones". Other good songs are "There Is Nothing" and "I Wonder". The fifth album "Ghost Ballads" is recorded in the abandoned, worn and haunted Maribel Caves Hotel in Maribel, Wisconsin (more commonly known as "Hotel Hell"). The environment must be an entirely natural and ideal place for Lonesome Wyatt's music creation. "Ghost Ballads" contains several good songs such as "The Golden Rule" and "You Cannot Be Saved From The Grave". The latest album "Halloween Is Here" is however only for "hard-core followers" like myself. The thing that’s unusual with LWatHS is that the quality doesn’t seem to decrease over time, it’s rather the other way around. Lonesome Wyatt is represented with a song (The Ballerina 's Twirl ) on one (Rodentia I) of the four compilations with The Best Of Dark Roots from Devils Ruin Records. It is a mark of quality.

Best songs: A Lovely Coffin, All I See Are Bones, There Is Nothing, The Golden Rule, You Cannot Be Saved From The Grave 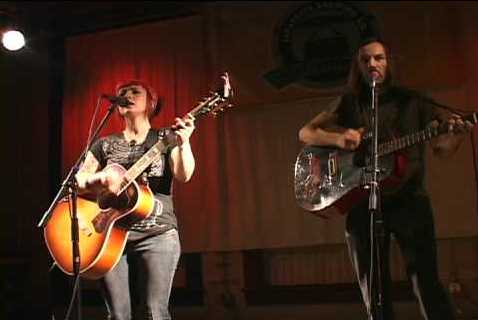 You can't evaluate Lonesome Wyatt without considering the fruitful collaboration with Rachel Brooke. The collaboration means that Lonesome Wyatt becomes a bit less gloomy and subdued, while Rachel Brooke stays pretty much the same (or maybe just a little bit darker). The have released two albums, “A Bitter Harvest” (2009) and "Bad Omen" (2015). "A Bitter Harvest" is the most well-known of the two. Brooke and Lonesome Wyatt toured together and decided to release an album together. Rachel Brooke and Lonesome Wyatt is quite an implausible combination, but at the same time congenial. They play and sing alternately in beautiful harmonies. The album consists of a collection of sad but beautiful songs. The album was very well received among critics and reviewers. The album was also placed as no. 11 in "The Greatest Underground Country Albums Of All Time" on the reputable site Saving Country Music (SCM), see website. The second album "Bad Omen" is approximately 42 minutes long and contains twelve songs of which Rachel Brooke has written five of them. The vocals of Rachel Brooke is crystal clear and cuts like warm knife through butter. "Bad Omen" stand the test of comparison with "A Bitter Harvest". Which one is best is open to interpretation and is moreover almost a metaphysical question. "Bad Omen" is a must have album for everyone interested in Lonesome Wyatt or Rachel Brooke in general and for everyone interested in Lonesome Wyatt and Rachel Brooke in particular. You can read a review here (opens in a new window). Both albums are far more accessible than Lonesome Wyatt's solo works.

Best songs: This Painful Summer, Crippled Farms, Darkness, Not Over You, If The Beasts Should Hunt Us Down, Don't Leave Me