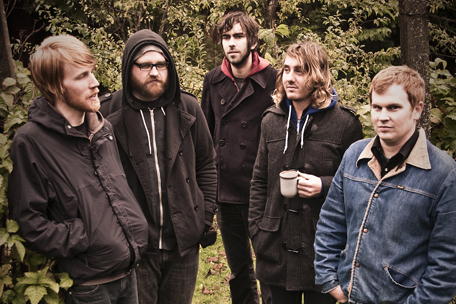 The Builders and The Butchers (hence TBATB) is a band from Portland, Oregon, see website. However, all members hail from Anchorage, Alaska (which clearly shows that “gothic country” thrives in all time and climate zones). The Builders and The Butchers is a magnificent name for a band in the genre, but the story behind is not very exciting. The name was the only name on a very long list of suggestions that wasn’t rejected by the band. The band was formed in 2005 of the remains of local bands splitting up at the same time. One important prerequisite was the decision to create a band that was really darkly themed. Initially the band name was “The Funeral Band” (which wasn’t an entirely wrong epithet, since the band is pretty obsessed with death). The band was formed by frontman Ryan Sollee (lead vocals, guitar and percussion), Alex Ellis (bass guitar, vocals and percussion), Ray Dude (drums, trumpet, melodica, vocals and percussion), Paul Seely (drums, trumpet, melodica, vocals and percussion) and Harvey Tumbleson (mandolin, banjo, guitar, vocals and percussion. The Builders and The Butchers has experienced limited turnover over time. Paul Seely was replaced by Brandon Hafner who in turn was replaced Justin Baier, while Alex Ellis was replaced by Willy Kunkle. Adrienne Hatkin has earlier played on live shows (mandolin, banjo, accordion, violin and percussion). Having two members in the band playing the drums may seem a little bit odd. The arrangement is as follows: one drum kit was split (where one played the kick drum and another playing the snare, while no cymbals were used) in what TBATB called a “deconstructed” drumming style. The band started out playing acoustic in the streets and outside music venues in Portland, Oregon. Eventually they were asked to open for other bands and moved indoors. They gradually got plugged in and became more amplified (for the simple reason of making themselves heard). Many other bands in the genre have moved in the opposite direction from electric to a more stripped down approach (of course, this depends on different starting point). TBATB has described their musical development as an organic growth. However, one thing led to another and TBATB began to tour relentlessly in 2007. In 2011 they played approximately 250 shows. TBATB are known for their raucous and rowdy live shows and close interaction with their audience. They are today a rather successful band (that is, with “gothic country” standards).

A caveat is in place. You have to tread very lightly, because TBATB is operating near the borders of “indie rock” (and you are not under any circumstances supposed to go there). If you for some reason still do, you will inevitable find yourself on a sloping plane where almost every band in the world could be amenable for an article. Let me for the sake of clarity say that this is clearly as far as I will go near indie rock (this boundless, treacherous and boring territory). But - rest assure - TBATB is approved, albeit by the narrowest of margins. As in the case of Murder By Death, TBATB would be just another ordinary indie band, if it weren’t for their weird, brooding and gothic sound. These properties and their obsession with death (with emphasis on sudden death) qualify them for my prestigious article series. However, TBATB has a certain rawness that could be traced back to their punk roots. TBATB has been labeled “southern gothic”, “dark folk”, “gothic Americana”, “doom and gloom”, “dark roots”, “Americana trash-folk”, “gothic Americana Gospel Rock and Roll”, "folk rock”, “neo-Americana” and “Post-Apocalyptic Folk(lore)”.

The songwriting process normally begins with Ryan Sollee writing the lyrics and some basic chords. The draft songs are then introduced to the whole band and a phase begins where music is put to the lyrics to finalize the song. Ryan Sollee has a very nasal, quavering and unsettling voice (despite this, it works in some strange way). The lyrics fit within the four pillars: life, death, good and evil. Dealing with death and other dark themes is a balancing act which includes high risks. Wrongly balanced, it can easily switch over to mannerism. However, TBATB succeed due to their insight into the fact that nothing can be dark without any glimmer of light in it. With that being said, the lyrics are very dark even by “gothic country” standards. Much time and effort has been put into the lyrics. They have been written and re-written several times. The lyrics are built around stories and the story is the starting point. This is a more difficult way to write songs. Many other writers begin with the lyrics and then build up a story from them. The Builders And The Butchers uses many instruments and a thick layer to build up their characteristic sound. TBATB haven’t changed their formula since their debut in any significant way. Their sound is not getting any softer over time. I personally believe that the found a perfect balance on their second album. It’s sad, but when TBATB begins to rock I tend to lose interest and turn a deaf ear to their music. In my opinion, they are not very interesting when they rock. But then, I prefer country music every day of the week.

The Builders and The Butchers has released five studio albums (and one live album and two split EPs). Considering their touring schedule (and the fact that they don’t write when they are touring) this is a high production rate. Their albums could be viewed as semi-thematic. On their albums they strive to capture their raw live sound and avoiding to much of overdubbing and editing (while still creating a more pleasant listening experience than is possible live). Their first album “The Builders and The Butchers” was released in 2007 on Bladen County Records (their clearly most raw and unpolished album). Their second album “Salvation Is A Deep Dark Well” was released in 2009 on Gigantic Music (deals with the duality between dark and the glimmer of light). Their third album “Dead Reckoning” (old method for sea navigation based on past position, speed and drift as an allegory for their musical development) was released in 2011 on Badman Recording Company. Their fourth album “Western Medicine” (influenced by the post-apocalyptic literature of Cormac McCarthy) was released in 2013 on the same label. Their fifth album "The Spark" was released in 2017. The album covers are very stylish (especially “Salvation Is A Deep Dark Well” and “Dead Reckoning”). All artwork has been produced by Portland, Oregon artist Lukas Ketner. In the “gothic country” genre there’s a desirable trinity between name, lyrics and music and album art to seek for. First, a good band name is a basic requirement. Second, the lyrics and the music should have a natural connection to the name. Thirdly, the band name and the lyrics and music should interact with the album covers. Then there’s a trinity (not as easy to accomplish as you might think). However, the importance of a trinity should not be neglected.

Best songs: Spanish Death Song, Golden And Green, Barcelona, The Wind Has Come, All Away, No Roses