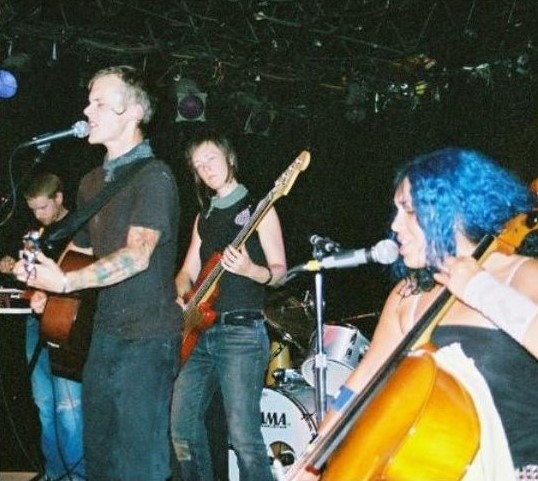 Woodcat is a band from Minneapolis, Minnesota. This article could easily end here, because this is almost everything I have been able to find out. I have tried to contact the frontfigure Marshall LaCount for this article, but haven't got any response. I have to confine myself to submission of puzzle with very few pieces and devote myself to more or less qualified guesswork. We will start with the band name, Woodcat. This spectacular name gave me something to ponder about. Woodcat is urban slang for something you say if you consistently fall asleep in psychology and seem to be heinously retarded. The band name could also have reference to an aquarium fish (Trachelyopterus insignis) or an old name for rabbit or just mean a wooden cat. My best guess, so far, is the urban slang theory. Woodcat can be labeled ”gothic americana”, ”southern gothic”, ”dark folk”, ”doom folk”, ”dark electro roots” and ”electro-americana”. Personally, I prefer the term "dark industrial gothic country", which I invented myself. Woodcat consisted of Marshall LaCount (banjo, guitar and vocals), Maria Vigesaa (cello and vocals), Kirstin Grieve (bass) and Matthew Lilyquist (digital drums and accordion). The digital drums is this case equivalent to a 16-pad Akai drum machine. Woodcat was a very shortlived band. I estimate that they were active somewhere between 2006-2008. The band disintegrated into bands like Dark Dark Dark (Marshall LaCount) or left the music scene to pursue other interests and careers. Woodcat is among others inspired of 16 Horsepower, Nick Cave and The Swans. These highly renowned household gods are the same gods as for another great band from Minneapolis, namely The Blackthorns (see separate article). The two bands have much in common like the similar musical style, odd setup of instruments, prominent female band members and a dark cinematic appearence. Woodcat and The Blackthorns also toured together. The music is dark, electric and unsettling combined with traditional roots. Woodcat works with a compact soundscape, slow tempo changes and drawn-out tones. The lyrics are witty and ironic, yet dark. The vocals of LaCount and Vigesaa is haunting and fits their weird music perfectly. Woodcat is probably too rich for most peoples blood. You will proabably feel pretty mangled and exhausted after listening to their album. However, it’s a pity that the band split up. In my opinion, Woodcat would had been able to accomplish great things if they had continued.

Woodcat only released one album during its limited life time. The album was self-released. It’s extremely hard to get a hold of a physical copy, since it was limited to 500 copies. I'm very pleased to have "Woodcat" in my cd collection. The self-titled album is relatively short: 40.20 minutes long and contains nine songs. The following description is very apt and retrieved from the biography on last.fm: "Woodcat" was apparently recorded inside a fishtank, giving it the claustrophobic and harrowing atmosphere of dread endemic to the genre.” Actually, it was recorded in a dark and cold church. It was produced, recorded and mixed by Robert Skoro (local Americana enthusiast). Woodcat has a song (Sithe) on one of the four compilations with The Best of Dark Roots from Devils Ruin Records (Rodentagogue II). It is a mark of quality.

The album cover is stylish: the name Woodcat in ornaments and a prairie wagon in gold print against a matte black background. The album art was designed by Natalie Bunton. The cd is nicely packaged in hand-screened cases, and contains an offset printed and 12-page beige booklet with proverbs. The booklet is bound together by sewing thread in a beautiful knot. Here is a short description of the content (p.1 same art as on the album cover, but in another color, p.2 empty page, p.3 ”The grass is always greener on the other side”, p.4 ”Everywhere we go, there we are”, p.5 ”A bird in the hand is worth two in the bush”, p.6 ”Only the strong survive”, p. 7 ”What’s mine is yours, and yours mine”, p.8 ”I gotta gets mine” (sic), p.9 ”That’s what it’s there for, so have at it”, p.10 ”It’s best to let sleeping dogs lie”, p.11 Acknowledgments and p.12 ”Woodcat” (the band name in ornaments).

Below is a suggestion for a CD compilation containing all songs from the the album. They are all solid.