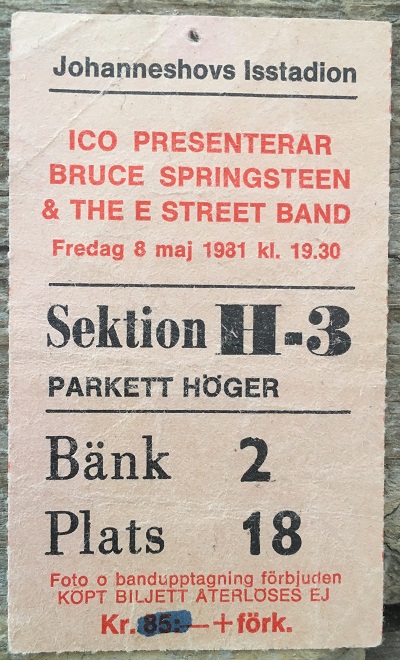 This blog post is another piece in the puzzle of how I became the Ambassador. It's been a long and winding road. I guess I am old as the hills now. 37 years ago today I experienced the best show so far (nothing indicates that an upcoming show is going to surpass this); Bruce Springsteen & the E Street Band in Stockholm 1981. The show was part of "The River Tour", a concert tour that took place in 1980 and 1981, beginning concurrently with the release of the album "The River", read more here (opens in a new window). Under the first and second leg of the tour he played songs that for some reasons had been left out of the album of which some were released in 1998 on the compilation box, ”Tracks”. The US part of the tour was critized for its loss of dynamics and its strong emphasis on the new album. Normally, the Boss would shuffle up and deal from his albums. The album was also thought of as too gloomy to fit live performances. "The River" is by many regarded as his finest hour. Personally, I prefer the debut album "Greetings from Asbury Park, N.J." and his early and unreleased songs on the bootlegs "The Demo Tapes - circa 1971-1972" and "Before the Fame". A danish company, ICO, arranged four shows in Scandinavia. Initially, just one show was announced in Stockholm (May 7th). Whether or not the second show the following day was already decided (but not announced) or was just made space for (to be decided) is a matter of dispute. However, venues and bands are inflexible objects, which points in the direction of already decided. Tickets to the two shows were also sold at the same occasion (very practical). I have come across information that you could buy an unlimited number of tickets. This information isn't consistent with my recollection. To my mind you were allowed to buy no more than 10 tickets per person. We needed 20 tickets. To support my recollection; we needed to be two persons in the queue at all time. Bruce Springsteen had issued a directive that tickets should go to fans at firsthand and not to the staff at the record company or to the music industry in general. The ticket price, 85 SEK (approximately $10) was affordable (in the price level of 2018 it's approximately 250 SEK or $30). I still have my ticket (see top right). The old tickets seems to be valuable. I noticed two tickets for sale on internet the other day at the bargain price of $100. There were no arenas for music shows back then. In fact, arena rock didn't exist in Sweden. The venue (Johanneshovs Isstadion) was built in 1955 as an outdoor arena. A roof was added in 1962. It was mainly used for ice hockey games. The capacity was 15 000 (that is, with the ice rink covered). The venue wasn't suited for music. There were non negligible problems with acoustics and free view. The venue is getting demolished in 2020 to give room for a new residential area. Poly drug users will be replaced by hipsters. I'm not convinced that this is an entirely good thing. 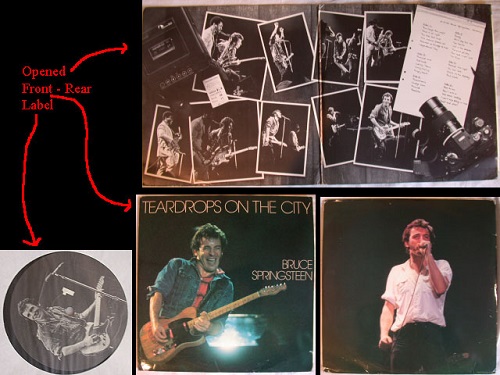 The show on May 8th 1981 in Stockholm became legendary. Not only did it surpass the show the night before (which was awesome). The show is considered by many to be the best of all the European shows and is very well documented. Read the set list here (opens in a new window). Despite prohibition of photos and tape recording (see ticket above) the concert was both depicted and recorded. In fact, there are two swedish vinyl bootlegs "Follow that dream" and "Teardrops on the city". The two vinyls have despite the acoustic problems been rated as: "Ridiculously overpriced, impossible to find even at the ridiculous price, these two three record sets nonetheless rank as the very best sound quality of any Springsteen live bootleg and that's saying something.” Read more about what the real bootleg aficionados thinks here (opens in a new window). If you don't want to spend your money on bootlegs and have three hours to spare you can listen to the complete show here (opens in a new window). The two shows got overwhelming reviews in Swedish evening papers. The highlights on May 8th were "Prove It All Night", "Darkness On The Edge Of Town", "Independence Day", "Who'll Stop the Rain?", "The Price You Pay", "The River", "The Promised Land", "Because The Night", "Point Blank" and "Can't Help Falling In Love". There were a lot of interacting with the audience during the show including long and heartfelt monologues about his upbringing. I must confess that my attention was divided between what was going on stage and the lovely inner city girls (explanation below). Bruce Springsteen was already a star, but unspoiled, humble and deeply grateful for his audience. Everyone of them. Bruce Springsteen & the E Street Band played 31 songs of which 12 were taken from "The River" album. There were also a few covers (Creedence Clearwater Revival, Woody Guthrie, Elvis Presley and Beatles). The concert started 8.00 p.m. and ended 12.00 p.m. (including a break). We missed the last commuter train home, but we didn't care because we were bewildered, happy and tired. When I listen to the show after all these years it brings back memories.

Back in my days there were basically two ways to get tickets; by physical queue or telephone queue. You could also take your chances on the black market (limitations in the number of tickets per person and the risk of tickets being sold a second time were hot topics at the time). The two latter methods, telephone queue and black market, were unreliable. You could get disconnected for no reason and all hours of waiting would be wasted. The black market could come up with nothing, ticket prices could sky-rocket and/or tickets could be fake. Some friends and I decided to go for physical queuing (be there or be square). Rumours began to spread that the queuing had begun. We were ready to move fast. One of us with a fresh driver license drove erratically to Hötorget in the central of Stockholm with our stuff; camping chairs, folding table, quilts, sleeping mats and bags, thermos and mugs and, last but not least, a backgammon set. It was deep winter. The tickets were sold at a small sheet music and record shop, Svala & Söderlund. It was housed in the big Concert Hall at Hötorget. We got a queue ticket. We practiced two shifts (day and night) and camped for a week. I did two or three night shifts. I couldn't sleep a wink. The night shifts were weird and you were approached by very odd existences who came up to the surface at nights. It was surreal; queuing below the stairs of the Concert Hall looking out on a big open square which during the day was filled with vegetable vendors, staring at the stars and at the same time freezing your butt off. The atmosphere at night was very friendly with interesting conversations. I got acquainted to a couple of lovely inner city girls. The song "In the Air Tonight" by Phil Collins ran constantly on someone's boombox (I know what you think, but the song can't be that bad. Sons of Perdition made a spooky cover of it). The last days the queue began to look like a refugee camp. We had a low queue number and got great seats. Due to "inconvenient working hours" the night shifters got the best seats on the parquet towards the middle on the second row.

A month after the show I graduated, said goodbye to class of 81', got drunk at the graduation party, a hangover followed, returned my rented dinner jacket (tuxedo) and had the weekend off before it was time to report for mandatory military service at Gotland Artillery Regiment (A7) located outside the town walls of Visby, which is arguably the best-preserved medieval town in Scandinavia and listed as an UNESCO World Heritage. The lovely inner city girls came by on their cycling holiday, left a note in the regiments sentry box and that evening we went for a drink together. We said goodbye for the summer. Then came the fall.