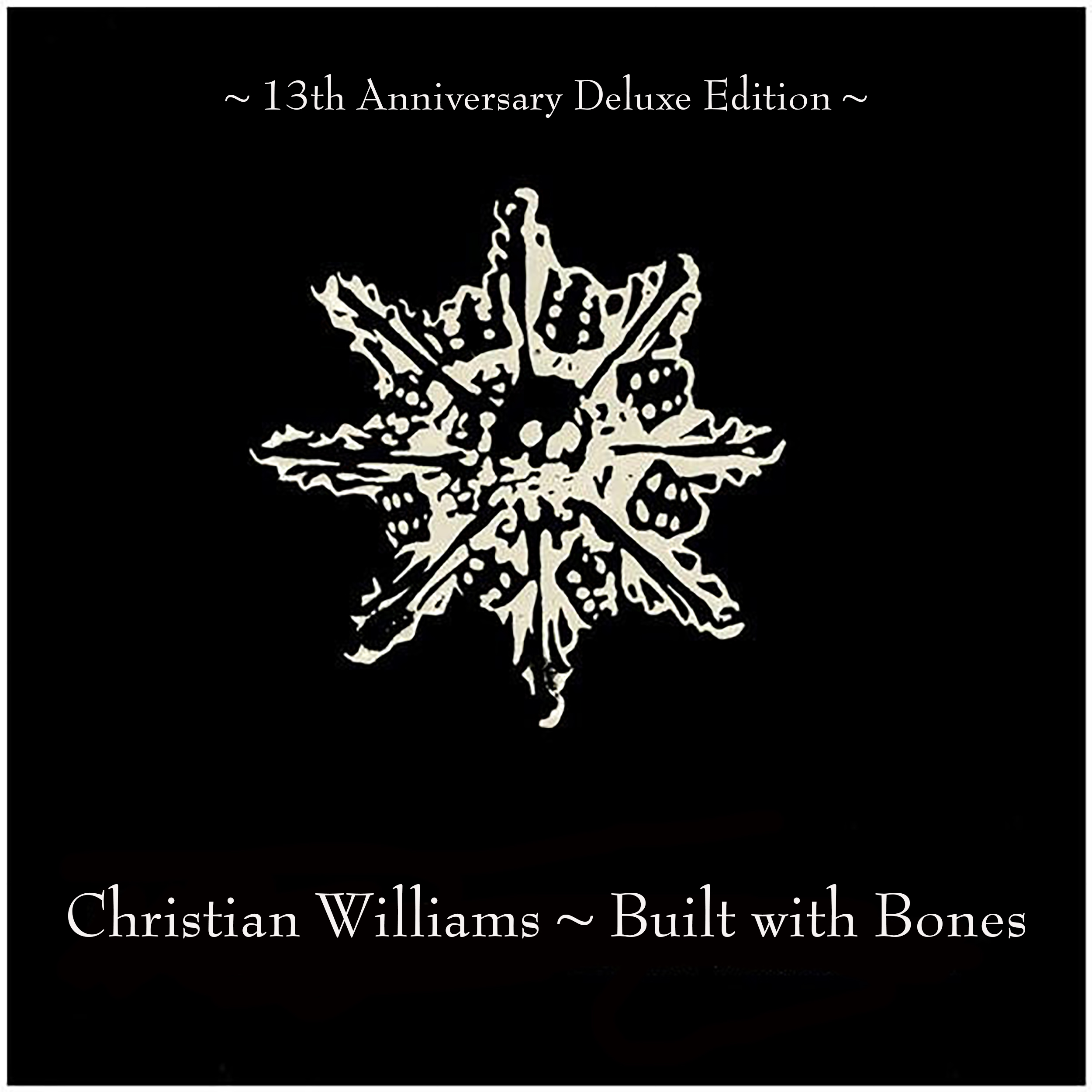 Lo and behold. The masterpiece "Built with Bones" has been remastered and re-released. The album comes with a new subheading "13th Anniversary Deluxe Edition". Digital only. The album a.k.a. the Holy Grail of all Gothic Country albums is listed number one on my most prestigious list (opens in a new window). This event was highly unexpected, to say the least. I contacted Christian Williams and asked about the background. In an e-mail he kindly replied: "To be honest, I had planned on releasing a 10-year anniversary edition in 2017, but I just never found the time that year to focus on it so I set the idea aside. Still, I recognized that of the several albums I’ve released, Built with Bones was by far the most popular among listeners on the streaming music sites like Spotify and iTunes. I thought there might be interest among those listeners for a “new-and-improved” version of the album that addressed some of the sound quality issues that bugged me as well an unfortunate typo that was introduced to one of the song titles during the upload process to the streaming sites 10 years ago (“When Its Roar Woke Me Up” was incorrectly titled “When It’s Roar Woke Me Up”). As a writer, that mistake (the apostrophe) has always bothered me, but I tried to forget about it because there was nothing I could do to fix it except delete the album from the streaming services. Finally, just a couple months ago, I received an email from someone (also a fellow writer) who said they love that song, but the incorrect apostrophe was driving them crazy every time they saw it and they were wondering if I could fix it. I wrote back and told them I couldn’t, but that email gave me the idea again to re-release Built with Bones so that I could fix not only the typo but some other things that distract me when I listen to the album. When I realized it would be the 13th anniversary if I made it happen in 2020, I knew I had to do it this year. The number 13 has always held a special significance for me for a couple reasons. First is the fact that so many people find the number scary or evil without really thinking about why they feel that way. Considering the darker tone of my music, I thought it would be appropriate to have 13 songs on the album just to make it a little more unsettling for those who don’t like the number. Second, my music has always been centered on the idea that our universe is a constant balancing act between good and evil, and that they both need each other for either to exist. From a symbolic perspective, the number 7 has traditionally been associated with God and the number 6 has been associated with Satan. Add those two numbers together (good + evil) and you get 13, hence my appreciation for the number." 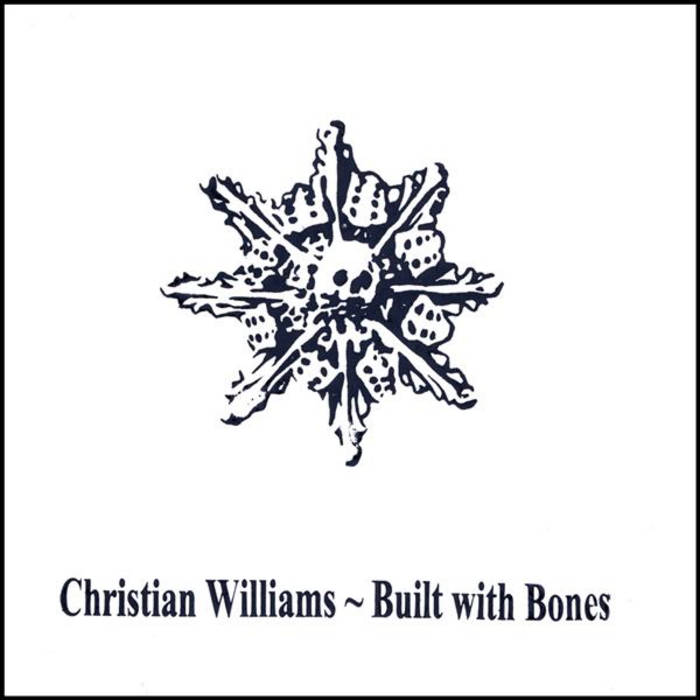 The 2007 release is a masterpiece in terms of musical quality, but has minor technical flaws. In my opinion, the output volume is too low. Actually, I had to normalize the recording level before I imported the album files to my Ipod. The Deluxe Edition features digitally remastered versions of the 13 original tracks plus seven previously unreleased tracks of alternate versions and live performances. There are several nuggets in the extra material. For example, the alternate version of "Shake the Dust" is stunning. But also a live performance of "Red" on KAOS Radio in Austin, Texas, and "Alone" a previously unreleased recording of Edgar Allan Poe's poem by the same name set to music by Christian Williams. I asked Christian Williams about the "digital remastering" process and his thoughts about the 2007 version. In the aforementioned e-mail he explained: "Built with Bones was just my second album and I was still very inexperienced when it came to DIY recording. My girlfriend and I lived in a very nice, but poorly designed apartment for recording music, so I was constantly battling extra noises and weird frequencies that would bleed into the recordings. Basically, I was recording in the middle of a large bedroom with walls that echoed and noisy neighbors that would stomp around on the floor or bump into the walls. I did my best to hide all of that in the original mastering, but there are a few tracks toward the beginning of the album (most notably “When Its Roar Woke Me Up”) where I can hear a high-pitched frequency that was likely caused by a grounding issue I had no idea was happening until I’d already recorded all of the tracks. Aside from that, I’ve also thought the overall volume on the album could have been louder. The problem was when I tried to boost the volume, it also made the high-pitch noises louder, too, which made everything worse. Long story short, my inexperience made the recording process a lot more difficult than it probably should have been. Knowing what I know now about recording, I’m amazed I actually had anything worth working with from that session. I’m also pleasantly surprised by how some of the ideas I had worked out. Fast-forward several years and I discovered the open-source recording software called Audacity. In that software, there’s a very handy EQ tool that I figured out how to use and it allowed me to zero in on those high-pitched tones and eliminate them from the recording without negatively affecting the rest of the song. I used that tool on all of the songs on Built with Bones and found that I was then able to boost the volume, the bass, and the treble where I wanted to. The end result is an album that sounds warmer to me, that sounds more ominous where it should (like the bass drum on “Red”), and overall, is a much more enjoyable listening experience for me. 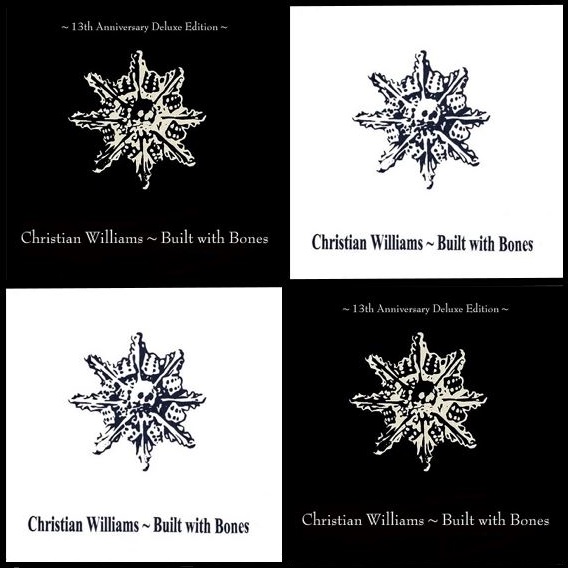 The album cover made by Paul Rhyne is listed number one on my "most spectacular" album cover list (opens in a new window). The two versions differ. The colours are inverted. The original 2007 version is white, while the 2020 version is black. Congenial. In the e-mail I asked Christian Williams what "Built with Bones", 13 years after its original release, meant to him personally. In the e-mail he replied: "I realize now that the process of making this album was a burst of creative inspiration the likes of which I haven’t experienced since. From start to finish, I wrote and recorded every song on that album in about four months. I remember the moments of inspiration and the circumstances of writing and recording pretty much every song, so I have a lot of good memories about where I was at in the point in my life. As I said, we lived in a very nice high-rise apartment in downtown Milwaukee, WI, with a view of the city skyline. I remember sitting in the dark just staring out the window at the city, brainstorming lyrics. I remember late-night viewings of HBO’s gothic series Carnivale and being inspired to write “Shake the Dust.” I remember a friend lending me the bass drum from his 6-year-old daughter’s First Act drum kit so that I could add the ominous booms in “Red.” I remember the frustration of my decision to hand-make the album sleeves and burn the CDs myself. All of it, though, was an album made on my terms with no compromises or short cuts. That alone made it a very special creative experience for me, and it’s an added bonus that so many other people still seem to appreciate the end result.

"Built with Bones" is an indispensible part of the gothic country genre. You can buy your copy here (opens in a new window) and enjoy it exactly in the way the artist intended. Better late, than never. The price is set according to the "name your price"-principle. I trust you will do the right thing.