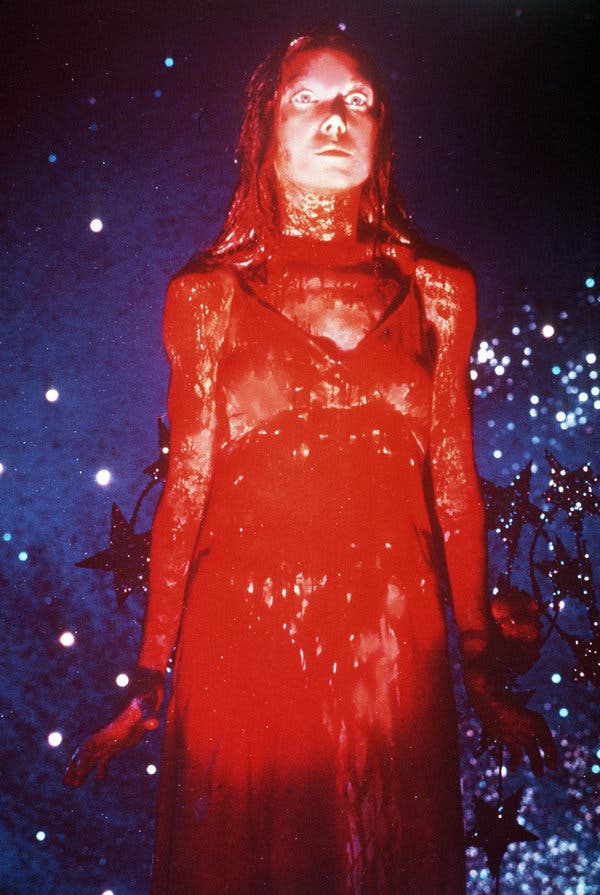 Some movie scenes are etched on my mind. One such scene is when Carrie settles the score in the 1976 American horror film directed by Brian De Palma, adapted from Stephen King's 1974 novel of the same name. As always, Stephen King is phenomenal in portraying outcasts, vulnerable children and teenagers. Evidently, I am not the only one who got scared out of my wits. The prom scene has had a major influence on popular culture and was ranked eighth on Bravo's 2004 program The 100 Scariest Movie Moments. Sissy Spacek (Carrie) received a nomination for the Academy Award for Best Actress. In short: Carrie lives with her fanatic religious mother. When Carrie gets her first period her mother cries out: "Oh, Lord! Help this sinning woman see the sin of her days and ways. Show her that if she had remained sinless, this curse of blood would never have come down on her!" Carrie has no friends and is bullied at school. However, she has strong psychic powers. Carrie thinks it’s a prank when Tommy, the boyfriend of Sue, asks her to go to prom. Sue had, out of remorse and the goodness of her heart, asked him to do this. Carrie hesitates, but reluctantly accepts to go to the prom. She puts on a nice dress, fixes her hair and wears a corsage. Carrie is a natural beauty. This could have turned out to be a rememberable evening for Carrie and helped her gaining some self-esteem and well-deserved respect. However, evil forces lurking everywhere and in everything. The ghastly inner circle ringleader and chief bullier Chris rig the election for the Prom Queen title and pour a bucket of pig blood over her. This humiliation will come at a price. Carrie is shocked. Her mother's predictive and scornful words "They're all going to laugh at you" are echoing in her ears. Carrie hallucinates that everyone is mocking her. After the initial shock Carrie regains control. In a sudden outburst, Carrie telekinetically seals the exits and sets it on fire, killing most of the teachers and students. All documented in a long protracted scene. Some people are electrocuted, others are crushed by falling rigs and backboards. It's water, blood, panic and chaos everywhere. Carrie proceeds lightly down from the prom stage and leaves the building. In style, if I might add.