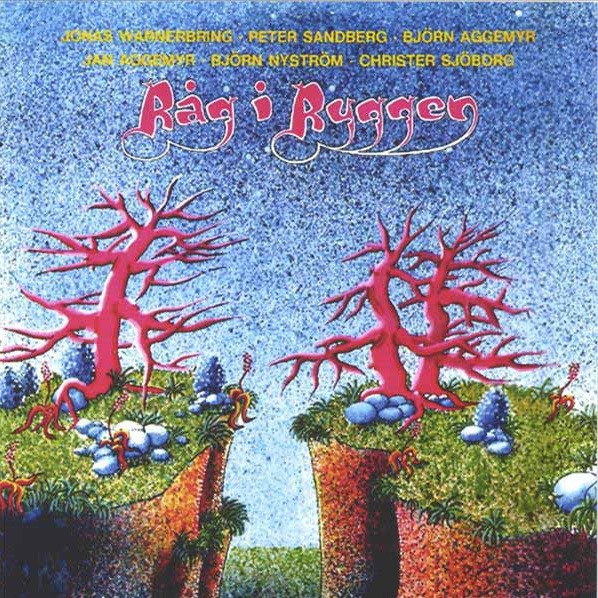 An album cover is an integral part of a record album. In fact, the artwork can enhance the listening experience. The golden age of album covers was the 1970's. This is particularly true for progressive and hard rock albums. The undisputed master and inspiration for many design artists was Roger Dean. His album covers often featured fantasy landscapes. The list of classic covers is long. To name a few: Bedside Manners Are Extra (Greenslade), Relayer (Yes), Squawk (Budgie), Octopus (Gentle Giant), Osibisa (S/T) and The Magician's Birthday (Uriah Heep). Where there are masters, there are epigones. Robert Liljegren-Jegenstam made this album artwork. I'm not an art critic, but this doesn't stop me for having an opinion. The drawing appears to be heavily influenced by Roger Dean. However, the artwork is clumsy and lacks both originality and quality. The album cover looks more like the habitat of Plupp (opens in a new window), the protagonist of a series of children's books by Swedish author Inga Borg (1925–2017). Plupp is a small figure with blue hair and a red nose, who lives in a goahti by a lake called Blåvattnet ("Blue Waters") somewhere in the far north. Plupp was non-binary and invisible to humans. Plupp also had the ability to communicate with animals. Eske, teske, täää! The Swedish progressive hard rock band Råg i Ryggen was formed in 1971 and their one and only album was released in 1975. They were highly influenced by acts like Uriah Heep and Deep Purple; yet also incorporating musical elements by more sophisticated outfits like Jethro Tull at times (nice blend of flute and Hammond organ). Their song lyrics were in English alternately Swedish. Anyway, it's a great album. But, clearly the design artist in question was neither copying the master or mastering the copy.