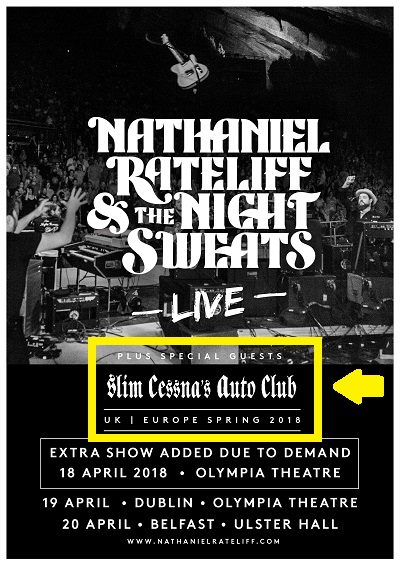 One of many remaining things on my bucket list is to attend a Slim Cessna's Auto Club (SCAC) show. A bucket list should meet the criteria of threshold of originality and have a certain difficulty level. SCAC are Denver-based and rarely tour outside the US and I live in Sweden. I think these facts tick in the two boxes. Therefore, I almost choked on my coffee when I read in the morning paper that they played yesterday (on March 30th 2018) at ancient Berns in Stockholm just 5 km (3 miles) from my home. SCAC were supporting Nathaniel Rateliff & the Night Sweats (a band complety unknown to me). How could I miss this? I follow SCAC on Facebook and get regular updates. I knew very well that they were in Europe, but I didn't notice that they were touring in Scandinavia. So close, but out of reach. The chances are slim that they will come again soon. Then I regained new hope. Maybe I could catch them on the tour? SCAC were playing in Dublin 18 & 19 April and I was going there on a weekend trip. But, we arrived the day after, 20th April. To miss SCAC twice in two weeks is quite of an achievement. I felt equally baffled and bitter when we passed by the old Olympia Theatre, located in Dame Street. The tour poster (left) smirked at me. At least, that's how I felt. SCAC were supporting another band. The very thought of SCAC opening for another band is contrary to my values. In my world they are always the main attraction. To miss SCAC is a heavy burden to bear alone. It would feel good to be able to blame someone else, at least partially, for this cock-up. Burden-sharing is a good principle, but on what basis is the burden to be shared? In this case, it's fair to use the 50/50 principle. SCAC could be a little more informative and promote themselves better, especially when they are touring in the Old World. On the other hand, I need to be more attentive and follow up news better (if I had checked out the European tour I would have come across the show in Stockholm). The fact that SCAC was coming to my little corner of the world wasn't really in my imaginary world. I will not make the same mistake again. Two days ago I read that they're coming to Europe again (May 31 through June 23), but not to Scandinavia. I'll have to take this matter under close consideration.