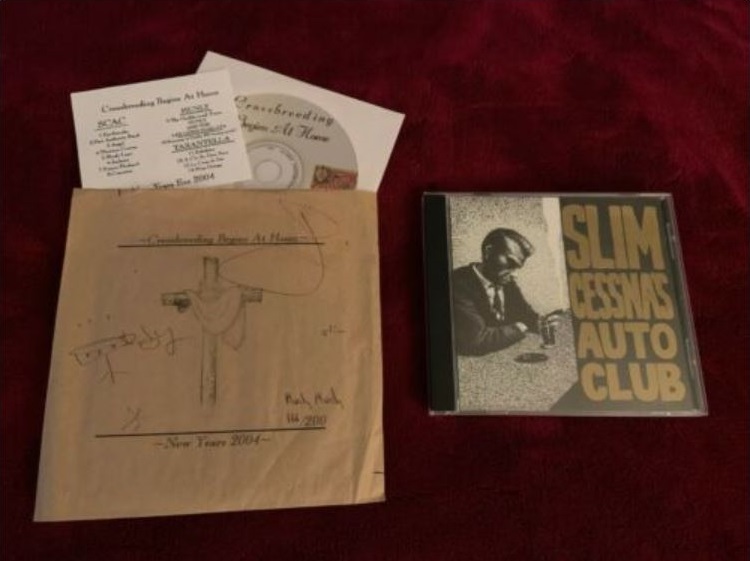 ”Once you eliminate the impossible, whatever remains, no matter how improbable, must be the truth.” These words are the wording of the famous fictive detective Sherlock Holmes written by Sir Arthur Conan Doyle. I came to think of the quote when two cds surprisingly arrived after more than eight weeks. Normally, it takes 2-3 weeks for a cd to arrive from the US. To lose a cd or two in the mail comes with collecting. It's inevitable. But some losses are bigger than others. The two cds weren't just any cds. The stakes were high: two rare SCAC albums: ”Crossbreedings Begins At Home” and their first self-titled and self-released album. Along with ”American Country Music Changed Her Life” (which I already had) they constitute a trinity in the SCAC catalogue. "Crossbreedings Begins At Home" is so rare, that I didn’t even bother to tick in the Wantlist-button on Discogs, which I normally do. However, improbable things do happen and one day it came up for sale on Ebay together with first self-released album(!). I just had to get them. It cost me $61 to win the auction over another bidder, $14.50 for the shipping and another $10 for import taxes and administrative fees.

Sometimes it's a long and winding road to get from point A to point B. Unlike many Swedes, I hold the Swedish Postal Service very high in regard. It was founded in 1636. The reversed licence conditions specified that 85 per cent of all items of mail should be delivered overnight and 97 per cent within three days. The Swedish Postal Service used to reach this goal. Quite astonishing, since Sweden has a population density of 24 people per square kilometer (1 kilometer=0,62 miles). The postal service used to work very well. Then came three disastrous events: deregulation of markets and new competition, a decrease in mail volume and a history of poor decisions. The far worst executive decision was to merge with Post Denmark in 2009. Some critics think that the Swedish Postal Service might as well have merged with a bankruptcy estate. A downfall in service and reputation followed. The Swedish locution "as a mail in the post" for something that is safe and reliable has ironically turned into its opposite. The Swedish Postal Service is applying a new strategy. A pilot project will start in September 2020 with delivery every other weekday instead of every weekday. However, I don't think the Swedish Postal Service is to blame in this case. They're not that bad. In fact, they are extremely effective when it comes to collect import taxes and charge administrative fees for my imported cds. Who's to blame then? A prime suspect is an anonymous US postal worker. The low work ethic and, to say the least, dubious working methods of postal worker Newman from the television show Seinfeld is forever etched in my mind. He didn't submit to the unofficial motto for US postal workers is "Neither snow nor rain nor heat nor gloom of night stays these couriers from the swift completion of their appointed rounds." On second thought, postal worker Newman is probably not very representative for USPS and they are hereby cleared. I started to speculate about what happened. One imaginative sequence of events after another. We tend to prefer complicated hypotheses to simple ones. But, always look for the simple solution. The cds were never lost, only delayed or disrupted due to the coronavirus. Probable, and quite possible.