Uncle Sinner to record "Let The Devil In" 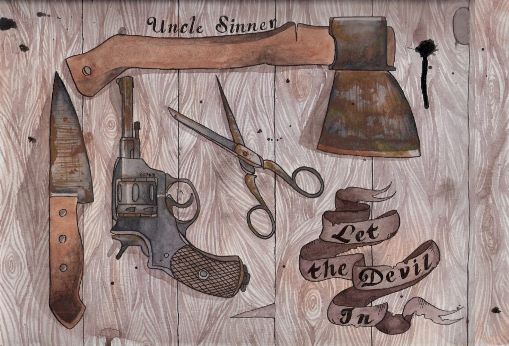 Good news from Uncle Sinner. In one of his very rare online appearances (on FB) he announced: "I am booking a week off in August to record my tracks for the next album. I have the songs all picked and arranged, give or take the possibility of whims occurring. Thanks for your patience." Patience is a virtue. And you really need to be equipped with a large dose of patience when waiting for the new album. The date for the release was earlier set to December 2011 as a "firmly arbitrary deadline". However, Uncle Sinner dislikes deadlines and the feeling that he owe people something. Therefore, it will be likely ready when its ready and not before. But, in this context it's only fair to mention that Uncle Sinner actually released a collection with outtakes and rarities, "A Pocketful of Glass Eyes" as a fundraiser in March 2014. It slightly eased the longing for the new album. The tentative album cover is made by Gal Stark Arad-Kabiri. If the album sounds like the album cover then I’m reassured. Uncle Sinner may not have the highest production rate in the "gothic country" genre, but in return 100 percent artistic integrity. And this is a not very common virtue these days.