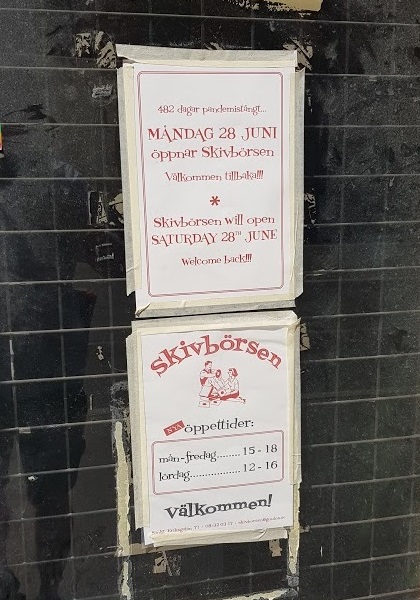 In the beginning of the year I wrote a blog post (Absolute zero) about one of the few remaining second hand record stores in Stockholm, read more here (opens in a new window). It wasn't just about any store. It was about Skivbörsen, established in 1971. Skivbörsen has been closed since March 2020 due to covid-19. On June 28th 2021 the store was re-opened. That's really surprising news. I never thought that it would resurrect. Not after being closed for a so long time. Skivbörsen is divided into three sections. You enter the store through a half staircase. It's not suitable for people with accessibility needs. In the beginning the store was only 10 square metres (placed on the left side of the staircase). Today, it's more of a storage room for cds which are less in demand. The store quickly expanded on the right side of the staircase (a former toy store). From this larger part of the store there's a narrow spiral staircase leading down to the cellar. Personally, I haven't been down there since the 1970s. But, it's a goldmine if you have the time and energy to excavate the gems. Not much have changed over the years including the original interior. The first owner was a bit odd and didn't trust some of the customers. He installed a low tech surveillance system of mirrors and monitored the business from a small box-room. The present owner took over the store in the mid-1990s. Skivbörsen is a wonderful establishment for cds and vinyls. However, if you're a house dust allergy sufferer this isn't a healthy place to be. A good record store normally has order and structure. Skivbörsen gives the concept of chaos a new and deeper meaning. On the other hand, the supply is unmatched and prices are very moderate. The society is slowly opening up again. The re-opening is a prime example of survival instinct and endurance. Welcome back Skivbörsen!!!