Review of "Songs Nine Through Sixteen" 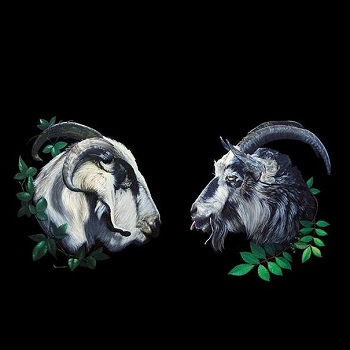 I try to avoid the high US shipping costs. I thought that I bought the new album "Songs Nine Through Sixteen" from the German label Glitterhouse Records. I received a double album "Songs One Through Sixteen". I didn't notice that in Europe "Songs One Through Eight" and "Songs Nine Through Sixteen" were released on a double CD and gatefold double LP. It figures. DBUK recently announced their first European tour in February 2019 to support the European release (France, Belgium, Holland, Russia, Spain, Germany, Schwitzerland, Austria, Czech Republic and Poland). In the US "Songs Nine Through Sixteen" will be released on January, 25th 2019. If I had been more attentive, I would have waited for the US version. Anyway, my mistake. I've pre-ordered the US version. No shipping costs saved this time since it ended with double costs. This is my second DBUK review. I wrote a review of the debut album in late November 2105, read more here (opens in a new window). In my position I'm bound to come across adjectives. It's inevitable. The DBUK press release is a strong contender for gibberish of the year: "DBUK exists on it’s own musical plane. Haunting, warped murder ballads come with a louche, anti-spiritual cast. Limerence and longing co-exist with casual cruelty in compositions that feature a remarkable amount of detail of the natural world; they often begin sparingly, building into an ecstatic reverberation of instruments and voices. Reverb and shake rattles abound, lending a spaghetti western vibe on songs written by Munly J Munly, whose dark humor fills the record lest anyone mistake the menace for malice." I've finally met my match. The excutive summary of the album: The first song is "Bonnie Clyde, The Big-Bull-Hen Of The Women's Prison". Not a bad song, but not an earth-shattering album opener either. The second song is "Deerslayer". The song is laid-back, but not all laid-back songs are cool. This song isn't cool. The third song "From The Estate Of John Denver" is epic and, by far, the best song on the album. This is nearly seven minutes of the finest of gothic americana, sparse arrangement and subtle lyrics. The fourth song "In San Francisco Bay" also fit the top-notch gothic americana bill. The fifth song "Coca-Colonalism" is also a great song and one of the highlights on the album. An extra plus for the witty title. After these three songs the song quality deteriorates significantly. The sixth song ”The Misrepresentation Of The Thompson Gun” is more or less unfocused spoken-word. The seventh song is "It's Killing Me". Hmmm, how should I put it within my limited english vocabulary? The word annoying is a word that comes to mind. The eight and last song on the album is ”And God Bless You”. The song isn't too bad, but doesn't meet the criteria for a good closing song. And finally, the overall assessment: I could copy paste the text from the ”Songs One Through Eight” review. The album contains both highs and lows. The highs on the album are pretty high, while the lows are quite low. If I had been the sole and exclusive producer I would have excluded some of the weaker songs and merged the material on the two DBUK albums into one. This would have resulted in an exceptional album. Now, "Songs Nine Through Sixteen" is just an ordinary album and there's no need for any gibberish.