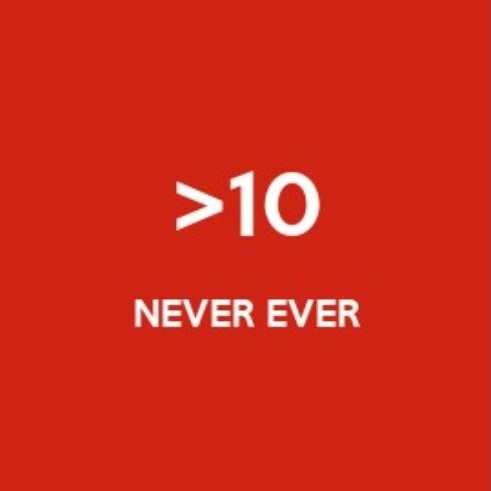 The American magazine Rolling Stone recently published a list of the "500 Greatest Albums of All Time". The list was originally published in 2003, with an update in 2012. For some reason it has become the most widely read and debated feature in the history of the magazine. One critic referred to the list as an example of "unrepentant rockist fogeyism". Personally, I have never cared much for Rolling Stone. It says nothing to me about my life. 500 is a large number. In fact, a ridiculous large number when it comes to lists. In this blog entry I will explain why a list of artists, bands, albums and songs never should exceed the number of 10. A bright and attentive Rolling Stone subscriber wrote in the commentary field: "Such an odd mixture of incomparable musical categories that really, it's a fools errand to even try to make a coherent list. That said, even within well defined groups that are comparable, the rankings are puzzling and seemingly arbitrary. A more interesting list would include a short statement as to why an album rose or fell 30 places from the last list in relation to another album that was also on the last list." This precise comment encompasses the three basic rules for lists: logic, consistence and level of originality. It seems like the staff of Rolling Stone missed that memo or consciously broke protocol (involved advocacy groups(!), used gross lists and allowed votes). "Shit in, shit out", the concept that flawed, or nonsense input data produces nonsense output is applicable in this case. Here's my bill of indictment. First of all, absence of logic. The unit of measurement must be accurately defined. The Rolling Stone list deals with the concept of "greatest". This is all very well, but "greatest" in what sense (commercially, artistically or some other aspect)? There must be a logical explanation to why no. 333 on the list Bill Withers "Still Bill" (1972) is greater than no. 334 Santana "Abraxas" (1970)? If it may as well be the other way around, you are out of your depth. The Rolling Stone list is equal to when an untrained student begins to write an essay without disposition, goal and meaning. Secondly, lack of consistence. A list must stand the test of pairwise comparison. This is a good way to determine how to access alternatives by providing an easy way to rate and rank decision-making. Not only must no. 333 on the list be greater than no. 334. The procedure will have to be repeated from the beginning, comparing no. 1 to no. 334, no. 2 to no. 334, no. 3 to no. 334, all the way up to no. 333. This is combinatorics. If the pairwise comparison test fail, you will have to start all over again. Pairwise comparison is a reliable method, but very time-consuming. Maybe, this is an area for machine learning in artificial intelligence. On the other hand, humans are complex. Thirdly, inadequacies in level of originality. A list should be unique. Copyright law and lists of artists, bands, albums and songs both require that a work must be original to the author, which means it must be independently created and possess at least some minimal degree of creativity. The Rolling Stone list doesn't meet one of these basic requirements. It's an impersonal concotion without an originator. And, last but not least, why should a list never exceed the number of 10? The answer is this. Logic, consistence and level of originality are perspicuous, controllable and manageable. This isn't a complicated theory. It's just good practice. I learned it the hard way.