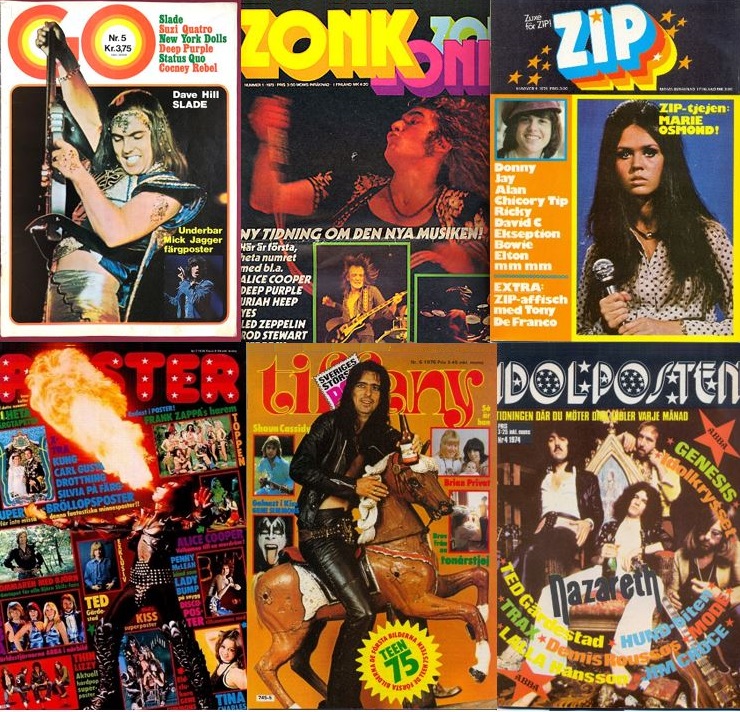 In the 1970s Swedish pop and rock magazines flooded the market. They were quickly taken out of circulation. To be honest, the Swedish magazines were only pale copies of more renowned international magazines. The German music magazine POP, read more here (opens in a new window) was the role model that almost everyone tried to copy. I occasionally bought POP, which was associated with the routine of decipher the grammar and looking up unfamiliar words in a dictionary. The new Swedish epigones were bleak at best and terrible at worst. Layout was definitely not their strong suit. Some of the magazines clearly focused more on idolship than on music, for example Tiffany and ZIP. Donny Osmond was asked what he thought about sex before marriage. Not unexpectedly, Donny didn't approve. Other artists were more outspoken. Suzi Quatro, in her one-piece black leather suit, revealed that she chose to play bass guitar because it felt so good between her legs. Moreover, the image-oriented magazine "Poster" was founded by Hans Hatwig, a German publisher who began his career in pornographic publishing. Sex was never explicit, but always implied. One of the magazines achieved some kind of publishing record. Idolposten managed to launch and to crash and burn in the same year, 1974. The best magazines were GO and ZONK. ZONK leaned towards hard rock and is by many regarded as the first proper Swedish pop and rock magazine. GO and ZONK had journalistic ambitions. In other cases, the meager editorial material seems to have been imported and, thereafter, poorly translated. The content was based on servility, banality and stupidity with an obvious lack of tonality. It gets awkward when adults try to communicate with teenagers in a personal note. Another attribute was the total lack of order, structure and discernment. Boyband-jerks like Bay City Rollers had the same status as giants like Black Sabbath, Deep Purple and Led Zeppelin. Unbelievable. The photos are etched in my memory. Some of the photos were fabulous and taken by the famous Swedish photographer Torbjörn Calvero, read more here (opens in a new window). However, most photos were mundane to say the least. The artists were depicted "as they were", which meant doughy, flabby, tired, and pale-cold-sweaty-hang-over faces. At the time, nothing escaped the harsh truth of the camera eye. This was long before any image process software existed.

The history of Swedish pop and rock magazines in the 1970s remains to be written. Some very basic but nevertheless important work has been carried out by a Swedish website, read more here (opens in a new window). It contains a brief introduction, publisher, year class and all covers of the magazines published from the early 1970s and onwards. Sometimes the hip magazines come up for sale at Tradera (Swedish Ebay). I never place a bid. But, I admire the dedication to document for posterity. After all, this is also what I do.