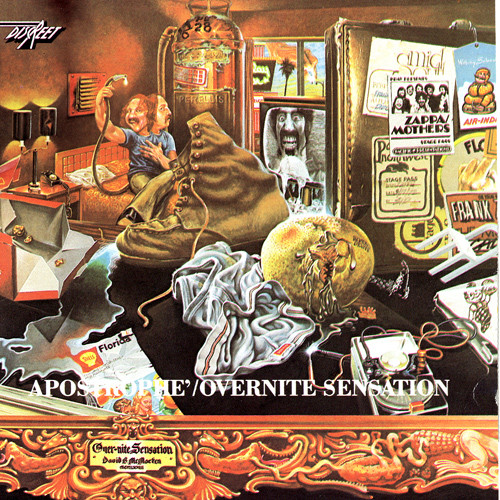 An album should be released exactly as the artist intended. Albums shouldn't be lumped together and re-released as "5 Original Albums In 1 Box". Who came up with this appalling concept? This isn't even acceptable if the cd catalogue is extensive. "5 Original Albums In 1 Box" is a violation of unwritten rules. The list of violators is long. To name a few: Blue Öyster Cult, Uriah Heep, Rainbow, UFO, Status Quo, Alice Cooper, Mountain, Lou Reed, Roxy Music, Rush, The Sensational Alex Harvey Band and Yes. However, the real violators are the record labels that are trying to milk out the last drop. A "2-for-1 album set" is, if not a violation then, a nuisance. The best 2-for-1 album set ever is Apostrophe'/Over-Nite Sensation by Frank Zappa. "Over-Nite Sensation" and "Apostrophe'" were recorded during the same sessions and released in September 1973 and March 1974, respectively. "Apostrophe'" was released as a solo album rather than a Mothers of Invention release. The two albums encapsulate Frank Zappa's extraordinary musical diversity and became his most commercially successful albums. The 2-for-1 album was released in 1990 with the Over-Nite Sensation as front album cover (with the text banner APOSTROPHE'/OVERNITE SENSATION in white) and Apostrophe' as back album cover. This unsightly album cover shows how dumb the 2-for-1 album idea is. It could be worse. The album covers on "5 Original Albums In 1 Box" looks like stamps on an envelope. Awful. I'm not a hard-core Frank Zappa fan. It's too quirky and odd for me. I only got nine albums of 62. However, the 2-for-1 album is extremely priceworthy (so much brilliant and advanced music on a single cd). But, all the musical breaks, tempo changes, twists and turns, guitar solos, whims and all the ridiculous care in details makes you exhausted. One Frank Zappa album at the time is enough. That's also what the artist intended.