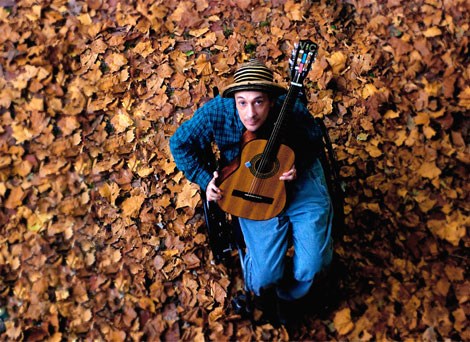 Christmas Day. Ten years ago today, dark americana artist Vic Chesnutt died from an overdose of muscle relaxants that had left him in a coma. Whether his death was accidental or not isn't important. More important is his impact. His music has been described as "skewed, refracted version of Americana that is haunting, funny, poignant, and occasionally mystical, usually all at once". Read the article about Vic here (opens in a new window). Vic Chesnutt was a productive artist and released 14 albums under 19 years: "Little" (1990), "West of Rome" (1991), "Drunk" (1993), "Is The Actor Happy?" (1995), "About To Choke" (1996), "The Salesman And Bernadette" (1998), "Merriment" (2000), "Left To His Own Devices" (2001), "Silver Lake" (2003), "Ghetto Bells" (2005), "North Star Deserter" (2007), "Dark Developments" (2008), "At The Cut" (2009) and "Skitter On Take-off" (2009). I have all albums in the cd format. 14 albums constitute an impressive production. However, according to Soundscan (official information and sales tracking system), he sold - in total - 104 000 copies, which is not even 7 500 copies per album. This is simply outrageous. In addition, at the time of his passing he peaked artistically. The albums "North Star Deserter" and "At The Cut" clearly showcased this fact. In the above-mentioned article I presented a playlist with his absolute best songs (which amounted to 33). Initially, I planned that the memorial playlist below should consist of "the best of the absolute best". Instead, I decided to do a new list with none of the 33 songs. And it's still an exquisite list. The list ends with "Grim Augury". A man awakes from a nightmare. His wife accuses him of being with someone “during the dream” and wants to know who she is. He denies forcefully and then reluctantly tells her the truth. Some stones are best left unturned. Horrible stuff, indeed. Vic Chesnutt wasn't afraid of turning any stones. In an interview for the New York Daily News in 2005 he declared: "Other people write about the bling and the booty. I write about the pus and the gnats. To me, that's beautiful." I unequivocally agree.