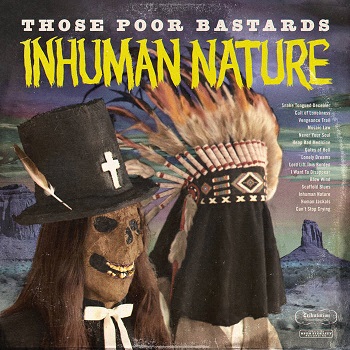 Well, let it be said that "Inhuman Nature" will not be played by hifi dealers who are in the process of selling high end stereos to audiophiles. Instead, they will cling to their ample safety margins and play Donald Fagen's "The Nightfly" (again and again). The new TPB album was released November 16, 2018 and is raw, unpolished and distorted. It sounds like if it has been recorded inside a claustrophobic closet with a tin can as microphone. The album sets off with "Snake Tounged Deceiver". This boogie-woogie song with rolling bass lines sounds like it was made in the 1950s, if it wasn't for the lyrics: "You fat little troll / You sick little gnome". The tempo ratches up a few notches in the second song "Cult Of Loneliness", not bad. The third song, "Vengeance Trail", is undoubtedly one of best songs on the album. This is what you want and expect from TPB."The medicine ain't working Bill / You're going to Boot Hill / Them owlhoots with lead I'll fill / I ain't ashamed to kill". The following song "Mosaic Law" is just 50 seconds of vocal and instrumental noise, basically. The fifth song "Never Your Soul" is gothic country in waltzing tempo. A trifle. The sixth song "Heap Bad Medicine" is catchy and one of the highlights on the album. I thought they sang about "Madison", before I checked the lyrics. "Arrows made of bone and knotty pine / In my back and through my heart and spine / Evil's always hunting me / Let me be / Just let me be". The next song "Gates Of Hell" has a nice chorus. The following song "Lonely Dreams", doesn't leave a lasting impression. However, "Lord Lift This Burden" is evil death country of the finest quality. It contains tons of distortion and mayhem. The tenth song "I Wanna Disappear" is boring. The eleventh song "Blow Wind" is probably the closest TPB ever will come to a love song. "Blow wind, blow wind / Blow my baby back home again / Sugar, sugar / Sugar, sugar / Sugar, sugar / I feel so cold". A sing-a-long-song. The twelfth song, "Scaffold Song", is the ugly twin of Marty Robbins song "The Street Of Laredo" with its poignant lyrics "Come all you young devils and listen to me / I'll tell you a sad story of bad misery". TPB quality! In my opinion, here is where the album should have ended. The last three tracks "Inhuman Nature", "Human Jackals" and "Can't Stop Crying" doesn't match TPB standards (which are high). "Inhuman Nature" isn't one of their best albums, but three or four songs will actually take their place on my prestigious TPB compilation list. The competition on the list is murderous (in so many ways).