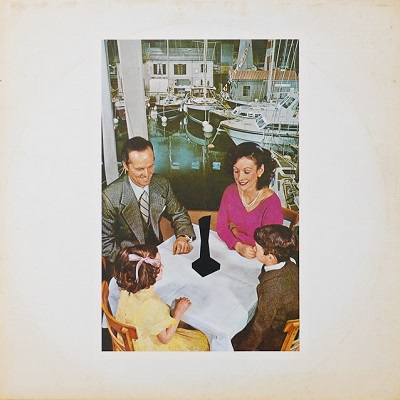 I grew up with the "Big 3"; Black Sabbath, Deep Purple and Led Zeppelin ringing in my ears. Most people regard Led Zeppelin II and Led Zeppelin IV as Zep's finest moments. Not only because of the content, but also in terms of the album art. I like "II" and "IV", but it was actually "Presence" that I played over and over again. The songs "Achilles Last Stand", "For Your Life" and "Nobody’s Fault But Mine" stand out. The album cover also stood out. It was perceived as "weird". The album art was designed by no less than Hipgnosis, read more here (opens in a new window). Hipgnosis was also behind the "Houses of the Holy" album cover. Allegedly, the band came up with the title "Presence" after seeing the images that were presented as front/back covers and gatefold images. Yeah, right but it's a good story. The album cover is a bit out of character. There's no natural connection between an epic hard rock band in the 1970s and a nice and tidy suburban, middle-class family in the 1950s. The album art was designed by graphic designer Storm Thorgerson and Aubrey Powell together with George Hardie. The background in the cover photograph is an artificial marina, installed in London's Earl's Court arena for the annual Boat Show, in the winter of 1974–75. The inner sleeve photographs came from various archive stock pictures, and was designed to resemble a feature in Time Magazine or National Geographic. The album contains ten photographs of a nuclear family contemplating a black object, an obelisk. "The Object" neither casts a shadow nor reflects any light and has a commanding presence. Well, nothing was too pretentious in the 1970s. "The Object" seems to create a divide; a Kubrickian monolith or a Spinal Tap mini-Stonehenge? "The Object" was also used for promotion purposes, read an insightful article here (opens in a new window). Today, you would have to pay about $2000 for an original. A copy is cheaper, about $40. I wouldn't mind an original object on the window sill. Original will always beat copy. In music as well as in art.