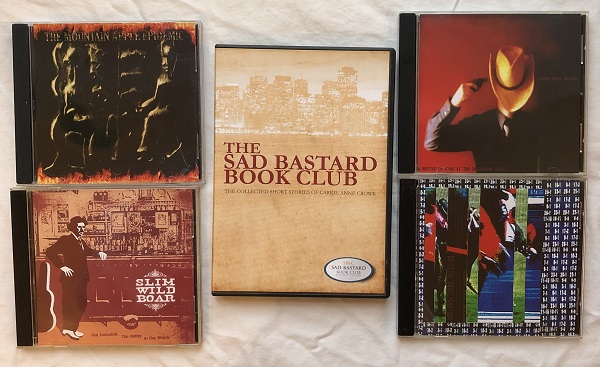 For a dedicated collector of rare cds like myself there's nothing more frustrating than an infinite set. You will survive knowing that you probably never will complete a collection, but it's unbearable not knowing if an album has been released or not (and, in theory, are in circulation). Specifically, I have the Devil's Ruin Records (DRR) label in mind, read more here (opens in a new window). You may now ask the obvious question: how hard can it be to figure this out? Let me tell you about it. I've spent many hours searching, comparing, triangulating, double-checking, speculating and rejecting. It's an advantage to have a monomanic disposition and be disinclined to changes. If you put in the time, the results will come. That's what the management textbook says, anyway. Despite the huge effort, the facts and evidence are inconclusive. Further research is needed. But, this year I actually made a major breakthrough. Six months ago, a large part of the DRR catalogue came up for sale on Discogs. I quickly purchased five albums (see image). It cost me a lot of money (price, registered shipping, import tax and fees) and is by far the most expensive purchase ever for me, but it was worth every penny. Never seen the cds for sale before. The knowledgeable seller gave me information about the last remaining days of the label that could be used for narrowing the gap between an infinite and finite set. Let's start with the basics. Discogs (reputable website and crowdsourced database) has 37 DRR-albums listed. After the above-metioned purchase I have 34 of them. One of three missing albums is JB Nelson's "Animal Extracts". According to Discogs no one else has a copy either. With reference to unconfirmed information on internet I asked the seller about a few other "DRR-albums" not listed on Discogs. Among them, two JB Nelson albums "A Letter To My Enemies" and "Animal Index". The seller replied: "The last order I made with Devil's Ruin was those two JB Nelson CDs. The guy soon disappeared and never sent them to me. According to JB Nelson, he has a copy of each. But I don't think anyone else does. It's sad. JB later released them on DIY CDR." This part of the mystery is hereby solved. The empirical evidence supports this. The albums were re-released on Cheap Wine Records. I also asked the seller about Botanica “Who You Are”, reportedly releasead on Devil’s Ruin Records, May 25th 2010. The seller replied: "Botanica I think was a "Special release". If you paid a certain amount a year you would get an exclusive release each month. Those releases never came out as far as I know. Some others that were supposed to be exclusive were "Before You Die..." and "Death's Head Hearth". Since I lack all boundaries when it comes to hard-to-find cds I contacted all three bands in this matter. I got a reply from "Before You Die..." and "Death's Head Hearth" with the same message. They never saw a glimpse of any album. I assume this goes for Botanica as well. If that is the case then this solves the other part of the mystery. This means both clarification and relief. I can probably forget the three JB Nelson albums and conserve my resources to the other two missing albums. What makes DRR so fascinating? The label was active between 2008-2010 and released over 30 albums of which five were compilations. The high production rate has an explanation. A reliable source revealed the story behind. It's expensive to make professional cds. Reportedly, the owner had direct access to pressing equipment. Therefore, he managed to press both quickly and a whole bunch. The copies were cheap. On Discogs, all but three DRR-albums are listed as cds. According to my source they're all cdr. Devil's Ruin Records went belly up in 2010. The owner vanished from the face of the earth. Another obscure detail. When the pressing equipment wasn't used for making DRR-albums it was used for making pornography. Well, the Devil's in the details.