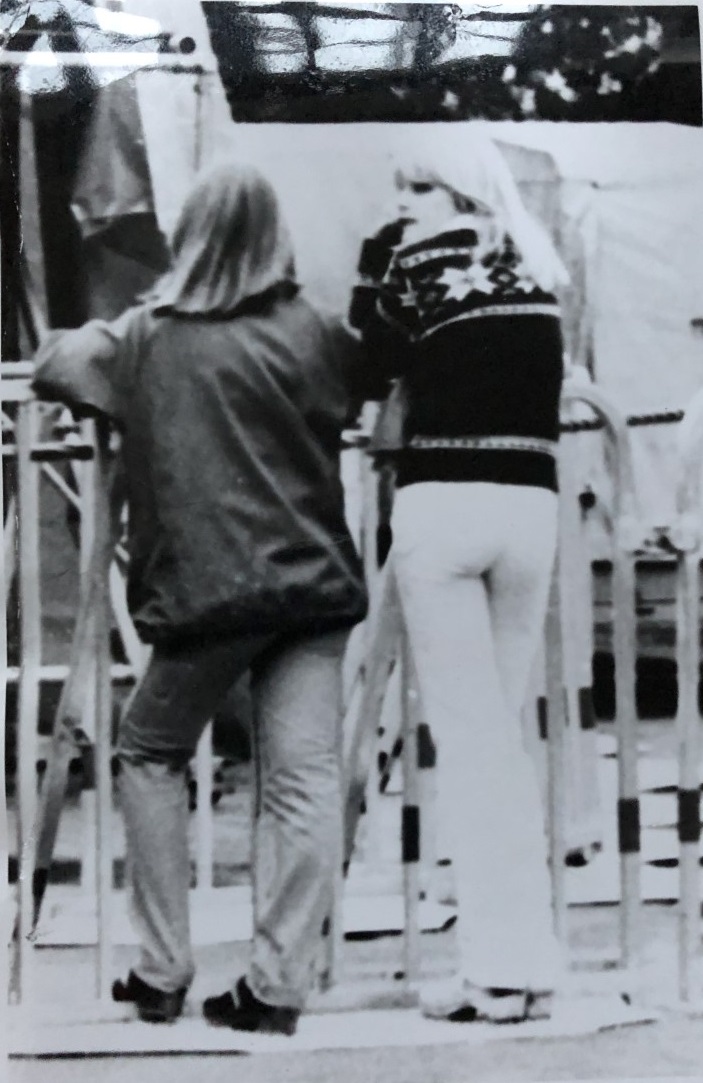 Outdoor shows has its merits. At least in the summer. The golden age of outdoor shows in Stockholm was in 1975-1977. I know, because I was there. The venue where it all took place was Gröna Lund, an amusement park(!). It's a relatively small park compared to other parks, mainly because of its central location, which effectively limits expansion. The scene area is also small. To name a few bands and artists who performed there in 1975-1977: Alice Cooper, Wishbone Ash, Status Quo, Uriah Heep, Kiss, The Sweet, Lou Reed, The Clash, Eagles and Thin Lizzy. The crappy photo on the left is taken by me on August 10, 1977. Later that night Thin Lizzy entered the stage. It was their second visit to Stockholm in less than a year. On September 30, 1976 they played at the Concert Hall. I had a ticket on the second row. The photo captures the fashion style at the time. Racoon make-up, swinging bangs, jeans (often white in the summer), wind jackets, folkloristic (synthetic) cardigans and, quite shocking, clogs (black or white). I saw a couple of shows in 1975-1977. However, I missed the british glam rock band The Sweet on May 5, 1976. They wrote history. Not only for cancelling two shows in a row (due to rain and risk of electrocution), but for the turmoil and disgust they created. They arrived at hotel Birger Jarl on May 3th after playing a show in Lund. Allegedly, a group of underaged girls were waiting outside the hotel to meet them. However, no indecent "meet and greet" occurred since neither underage girls or alcohol were allowed in the hotel rooms. The hotel was managed by the Mission Covenant Church of Sweden and they had a strict policy. Unsatisfied desires led to disappointment and hostility. Eventually, the staff threw them out. The editor of the magazine Poster (read more here, opens in a new window) intervened and tried to help them out. From a phone boot (yes, kids) he called virtually all hotels in Stockholm. Finally, they found refuge at hotel Malmen. You have to make hard prioirities when you are on a short-stay in Stockholm. The Sweet visited the dubious sex club Sexorama, known for live shows and naked women dangling in dusty nets over the tables, dim lightning and common despair. Things went from bad to worse before the show. During a soundcheck a couple of teenage girls slipped through the security and reached the scene area. This minor incident made guitarist Andy Scott very upset. He punched artist manager Ove Hahn in the face so hard that he fell into the tulip arrangements below the stage (yes, the same flower arrangements that Uriah Heep-singer David Byron fell into, read more here, opens in a new window). When the show was finished the sweet guys topped it off with smearing ketchup on the windows in the dressing room, urinating in the champagne coolers and, last but not least, handing over a turd in a folded tablecloth to manager Ove Hahn as a gift. Ove Hahn was a chastened man (when Jimi Hendrix played his set well overtime in 1967 he simply pulled out the power plug of the amplifier), but even he was shocked and appalled. "In my over 14 years as a manager, I have never experienced something so swinish". The band's manager David Walker tried to pour oil on troubled waters: "We are dealing with young, illiterate scoundrels who have become millionaires in a blink of an eye. They are not human beings, they are animals!". But the story doesn't end there. Legend has it that the band, not unexpectedly, received a complaint letter from Gröna Lund. The Sweet replied by sending a box with feces to the organizer. They were never booked again. 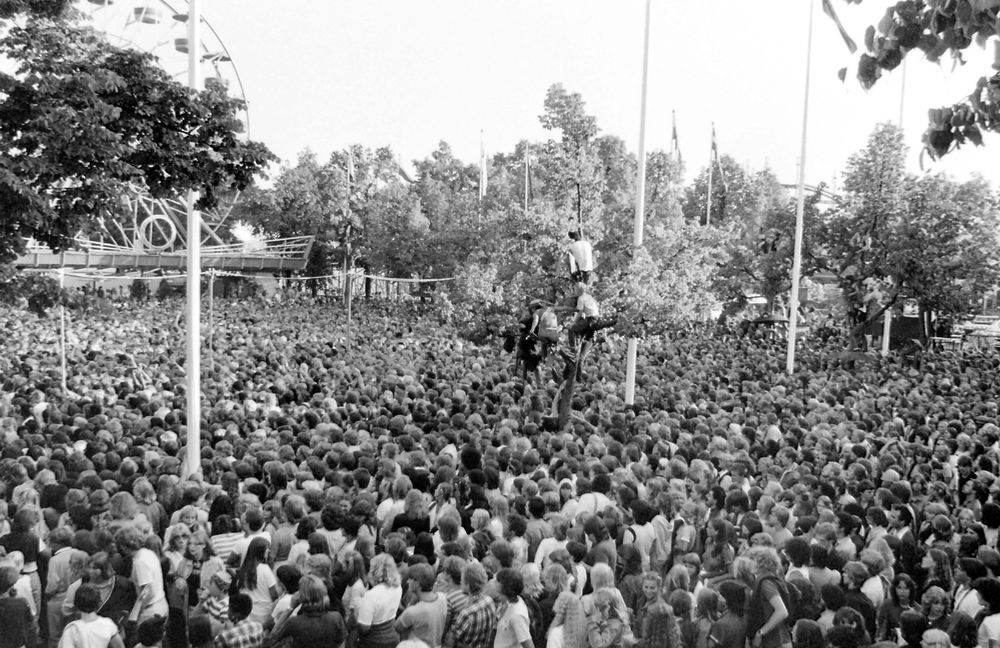 On June 17, 1980 Bob Marley performed at Gröna Lund for the fourth and last time (the Uprising Tour). Bob Marley was a superstar. He could have played at a larger venue, but wanted to come back to Gröna Lund who had booked him when he was an unknown artist. The hospitality rider included Malvern water, four liters (1 gallon) of pure fruit juice, a couple of Swiss quality cheeses, fresh bread, a couple of beers and two jars of jamaican honey. Allegedly, he was paid SEK 200 000 in cash. The attendance figure was estimated to 32 000 attendants. It still stands as the record for Gröna Lund (today's maximum is 17 000). In those days there was no such thing as prepaid tickets. It was be there or be square. People had waited for hours to get in and were desperate. Back in my time the bands brought their own PA system. The BMW loudspeakers were enormous, pumping out reggae basslines at unprecedent decibel levels. The soundcheck broke the floodgates. Some people climbed over the entrance gate. Others sneaked in from the rooftops of the adjacent residential area. People were everywhere to get a glimpse of BMW: in trees, clinging on to the Ferris wheel, on top of the carousels or on somebody's shoulder. Too many people in a small area could quickly turn into a disaster. Artist manager Ove Hahn understood this and acted. He grapped the microphone from one of the backing vocalists in the I-Threes and asked the audience, friendly but firm, to back a few steps to avoid people getting squeezed against the stage barrier. The crowd obediently stepped back. It was chaotic, but strangely enough nobody got seriously injured that night. Maybe the friendly atmosphere, the mesmerizing music or the marijuana smoke had a calming effect, or all of them in combination. Bob Marley was marked by cancer, but gave everything he got for almost two hours. The first song was "Natural Mystic" and the closing song was "Lively Up Yourself. The show became legendary and I'm very happy to have been a part of it. And the times were beginning to change. Not many people with racoon make-up or clogs. And, for what I can remember, no feces. 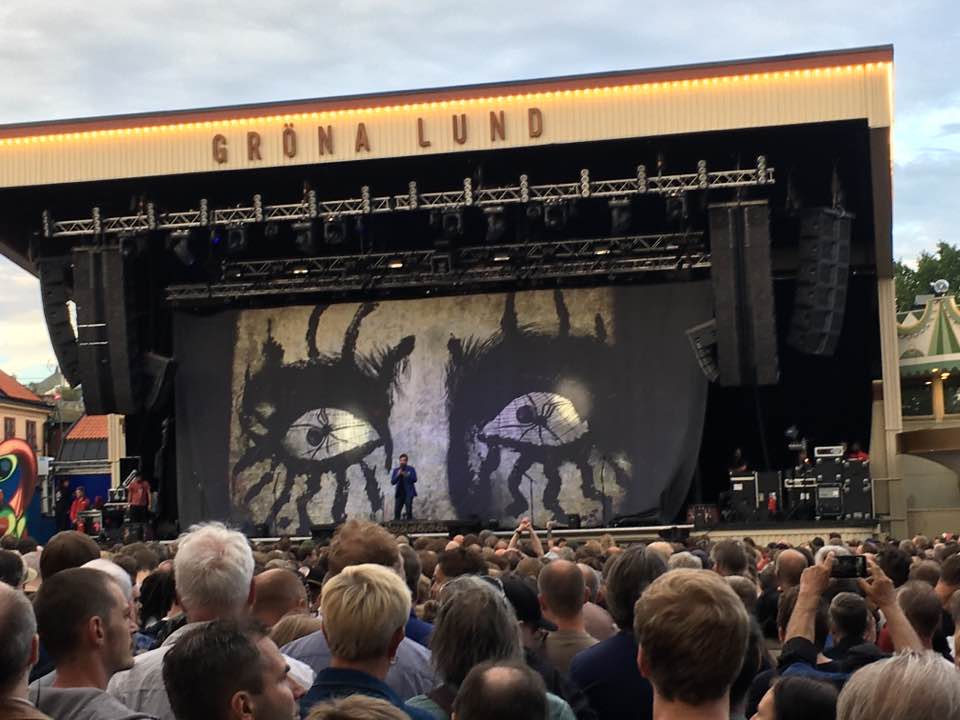 "Time is a flat circle. Everything we have done or will do we will do over and over and over again- forever". 40 years after the Thin Lizzy show I'm back at the very same place watching Alice Cooper and singing along with little or no credibility: "I'm eighteen / And I don't know what I want". Probably 80 percent of the audience were not even born in 1977. Apparently, Alice Cooper attracts all sorts of people from all sorts of places. You could hear accents that indicate a 300 km (200 miles) drive. Despite the guillotines and decapitations it was a family-friendly show in the bright summer night. And there were many more shows that summer. Gröna Lund has managed to nurture customer relations over the years and going there in the summer has become somewhat of a tradition for many people. One master stroke was to introduce season card. That summer you could see bands and artists like Megadeath, Elton John, Slayer and Patti Smith without paying anything extra. Some things are exactly the same. Like the smell of cotton candy, burgers and popcorn. But the circle of time isn't entirely flat. We don't end up precisely were we started. Some things aren't the same. Ove Hahn isn't around. He died in 2009. Ove Hahn was the artist manager between 1961-2000. That's committment, folks. I have also changed. With age comes less tolerance for crowding. In fact, I can't stand when people push me or try to walk right through me. No respect for elderly people anymore. And last, a major change. Not a single person with racoon make-up (except Alice Cooper) or clogs. And probably no feces.