"The difference between Garageband and a studio" 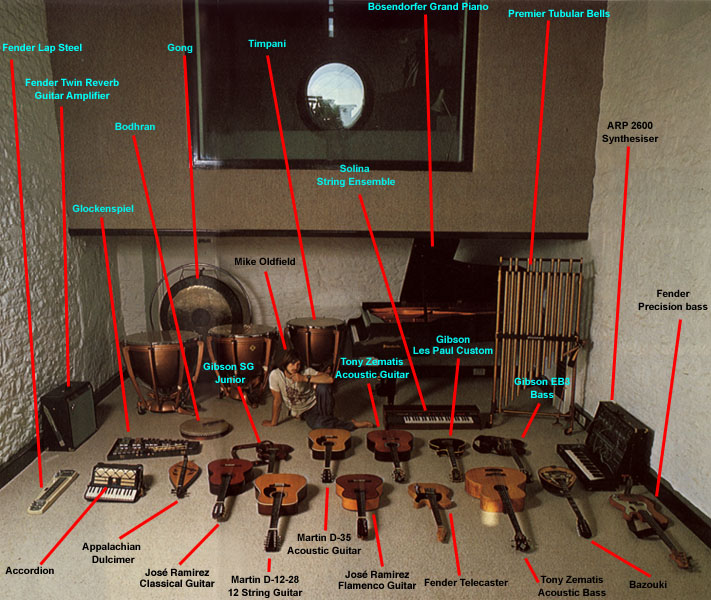 Some people believe that free music studio software like Garageband is equal to having your own fully-equipped studio. Well, think again. Garageband is free. A music studio cost a fortune and not many people can afford it. My point is the comparison and delusion. In fact, it's outrageous, egregious and preposterous. I listened to Mike Oldfield's "Boxed" recently (a 3-cd with quadrophonic remixes of "Tubular Bells", "Hergest Ridge" and "Ommadawn" along with Collaborations) and stumbled over this image (if you double-click on the image to the left it will open with higher resolution). The image depicts the artist surrounded by instruments in his home, Througham Slad Manor in Bisley, Gloustershire, shortly after he'd moved there in 1975. Some may see a young millonaire showing off with his many expensive instruments. However, I see a young millonaire who understands that every instrument is unique and have its place and role. Many of the instruments used on "Ommadawn" are shown here, except for harp, mandolin, banjo, spinet and electric organs. The Oldfield story is sad. Mike Oldfield released Tubular Bells in 1973, when he was just 20 years old. The following two years "Hergest Ridge" and "Ommadawn" were released. And then the creative forces were depleted. This is the worst thing that can happen to an artist. To know, deep down inside, that you never again can recreate anything new at the same artistic level. This hasn't stopped Mike Oldfield from releasing 21 studio albums after the classic trilogy. It only serves to illustrate the epic fall. Well, life could be a lot worse. To be dependent of Garageband, for instance. In fact, if I had been a depleted musician I can't think of anything better than to live in a grade two listed manor with a recording studio in the barn and with crawling distance from the village pub.