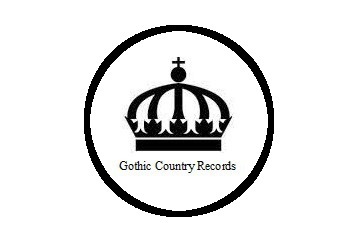 There might exist two parallel universes. If I by any chance would wake up in the other universe (the one where I would have very strong economic resources), I would undoubtedly start a record company and become a "gothic country" media mogul. The format would be cd among others. The name of the company would be "Gothic Country Records" (see record label logotype on the left). I would be known for "boldly go where no man has gone before", in exploring the genre's darkest corners and raising the bar for high-risk, not to say, wreckless economic behavior. In an act of megalomania I would even consider to start regular "boy bands" and "girl groups", with young aspirating goths and emos. They would, of course, be short lived. It's the thought that counts. Sooner or later, the economic resources would run out and insolvency would occur. Is this the only and inevitable scenario? I don't think so. Of course, gothic country is an aquired taste and not for everyone. But there should be more people out there, i.e. people that have an obvious risk behavior when it comes to their music taste, but are not (yet) beyond salvation. Take the encouraging example of The Handsome Family. Their song "Far From Any Road" was recently selected as the theme song for HBO's 2014 crime drama True Detective by the show's music director, T-Bone Burnett. The song made them known to a much wider audience. The Handsome Family was perceived as a "new" band with a "new" song. The Handsome Family was formed in 1993 and the song was released on "Singing Bones" in 2003. My conclusion is, given the right custom marketing and the adequate promotion the "gothic country" genre would be significantly better known than it is today. I also think "Gothic Country Records" would be profitable in the long run. What evidence do I have that support this conclusion? None, but I choose to believe.