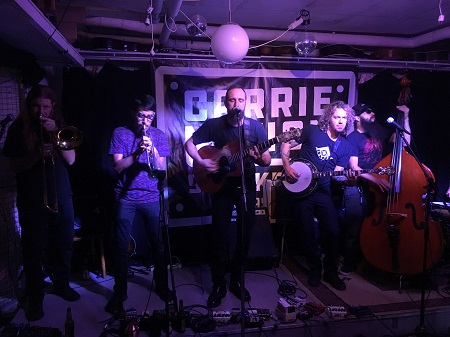 I was overrun by Carrie Nation & the Speakeasy. Well, not literally but figuratively speaking. Yesterday they played in a small venue called Twang in Stockholm. To my knowledge this is their first time in Sweden. Let it be said. On behalf of the Kingdom of Sweden I want to apologize to the people of Kansas, to the inhabitants of Wichita and, last but not least, to CNS. The number in the audience barely outnumbered the band. What's wrong with you urban hipsters? Still, CNS put on good and rowdy show. CNS started out in a high tempo. When the first song ended the frontman, guitarist and vocalist Jarod Starling ironically asked: "Any questions?". No one had any questions. This wasn't a seminar. Ever heard of a trashgrass band with wind instruments? Well, it has to be a first time for everything. The trumpet and trombone are important ingredients in the CNS soundscape and are given plenty of space to excel. Another weird thing. I've never seen a washboard being handled by someone with his garden gloves on. CNS lyrics deals with social awareness and social criticism with a distinct bite. Compared with the arrangements on their two albums (2 ½ albums if you count the split album with Cletus Got Shot) the songs played yesterday were more elaborate with long and dreamy psychedelic jam sessions. But CNS are best in their short high-tempo songs. One of the highlights was "Way To Kansas". Personally I missed "Obis", "Trying Times" and "I Saw Your Daughter". This is a peripheral remark. I hope CNS can forgive us swedes for not attending and will be back soon.