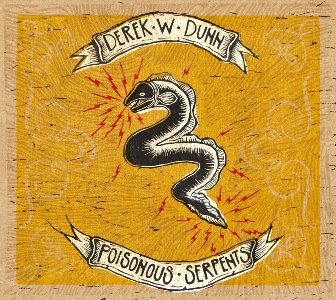 Derek W. Dunn's "Poisonous Serpents" has arrived. He sent a note on his FB-page: "US Customs is a bitch" and warned everyone who ordered from outside of the US that it could be a while. Well, all is well that ends well. You can buy the album physically or digitally in the format of your choice at CD Baby, just click on this link.

I must admit that I had my doubts whether "Poisonous Serpents" would come true. Ever since .357 String Band disbanded in november 2011 Derek W. Dunn has been working on the EP. New information and timetables have followed upon each other. But now it's here. Let me start by saying it was worth waiting for. Another very pleasant surprise is that .357 String Band are almost reunited on the album. Billy Cook, Joseph Huber and Rick Ness plays on five, five respectively four of total seven songs. The songs "Let The Bones Be Burned" and "Poisonous Serpents" were destined for the uncompleted  fourth album from .357 String Band. However, this is not .357 String Band. Not even .357-nostalgia. It's Derek W. Dunn's album. No question about that. All songs are written and arranged by him and they are all solid. The sound is also partially different from .357 String Band. Despite the fact that he tours and works very hard and ought to be pretty worn-out by now, he brings newness and energy in to the album. The music is varied. There are fast and well-written songs like "Let The Bones Be Burned", "Roll On" and "Hell In Your Cold Cold Heart". In songs like "Snow In The Pines", "Pressure", "Feels Like I'm Blue" and "Poisonous Serpents" he shows great singer-songwriter abilities in the old-school country vein. The lyrics to "Poisonous Serpents" are brilliant (therefore I include them below). The sound quality is also excellent. What more can you wish for? A full-length album from Derek W. Dunn.

"I've been handling poisonous serpents. I can feel their poison in my mind
Been mislead by a million false prophets. Been seduced by wonders, and by signs
And I been drinking deadly things. I can feel the poison in my veins
I been breathing fire and brimstone, trying to kill the den of vipers in my brain
I put my faith in all the wrong places. Tried to cure my head to heal my heart
Got to lost to find my way home, and walked in circles right back to the start
So now it's time to fight fire with fire. Now it's time to face what I fear most
Cause, I ain't ready to come home yet, Lord - I ain't ready to give up the ghost
So get behind me, Satan, I cast thee out!
Now it's the time to cast out devils. Now it's time to speak in brand new tounges
Now it's time to be re-born and breath new air through these burned out lounges
And they say these signs shall follow - me, I'm still waiting to believe
So for now I'll cast out my own demons; put my faith into what I can see
I'll pluck out the eye that offends me; turn a deaf ear to all their wicked tounges
I'll cut off the hand that offends me; now I know that the hour has come
And now I know it's now or never; I do believe that I can make this change
Placid waters or lakes of fire; it's my choice, I'm going to drown either way
So get behind me Satan, I cast thee out!"