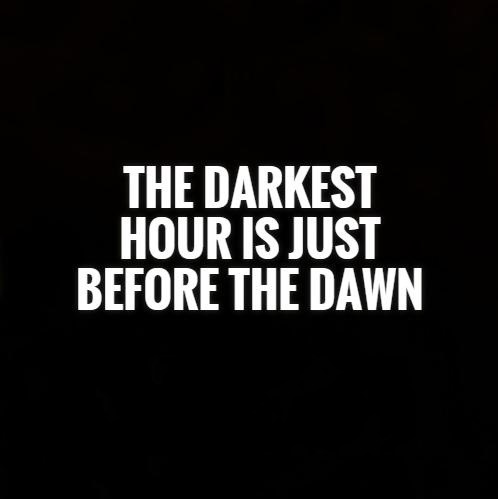 "The darkest hour is just before the dawn". The English theologian and historian Thomas Fuller is attributed to this saying (from A Pisgah-Sight Of Palestine And The Confines Thereof, 1650). It means that things often seem at their worst just before they get better. It's a positive and uplifting message, but the darkest hour is when the sun is farthest below the horizon. This is clearly not just before the dawn. But, let us put the astronomy aside for a moment and focus on the message. The new decade began with great expectations. Well, covid-19 has put a dampener on things. Death is the worst of all. Getting very sick comes second. Other negative aspects comes third. The economic, social and psychological consequences are impenetrable. People have lost their jobs or their income. Some people have been hit harder than others, predominantly in the so called culture sector. The times are hard in this sector even when the economy is booming. Music production and live events came to a grinding halt. It's sad and depressing. Very few albums were released in the gothic country genre this year: "Trouble of this World" by Uncle Sinner, "The Child Who Does Not Feel the Comfort of the Village will Burn it Down to Feel its Warmth" by T.K. Bollinger. You can read the reviews in the blog section. Lonesome Wyatt And The Holy Spooks released two albums, "Agonizing Love" (released in 2019, but the cd version was released in 2020) and "Dream Curse". They were both good releases, although the latter is the slightly better one. In terms of quality, 2020 was a passable year considering the circumstances. But this is not possible to establish with certainty. There are probably too few observations in the dataset.

What about next year? For many years, I've been very pessimistic and petulant about the future and often declared that the best years for the genre have come and gone. But, maybe now is the time to reconsider. I've had the same three wishes for five years in a row. The first wish: a new gothic country album from Christian Williams. The last album was released over ten years ago. A new album is on the way in 2021! This was a surprise, to say the least. Wonderful news. The second wish: a new album from The Victor Mourning. This wish will come true, hopefully in 2021. The third wish: to acquire at least one of the hard-to-find four missing albums (read more here) and to get all albums from the defunct label Devil's Ruin Records. The first part of the wish failed. But, I managed to get a hold of a physical copy of "Bangtown" by Big John Bates. The complete Devil's Ruin Records catalogue is (maybe) within reach. I wish for the same three things in 2021. It's now or never. It seems like next year is when all wishes (or most of them) will come true. What about new releases in 2021? Wovenhand's ninth album "Silver Sash" was scheduled to be released in 2020, but has been postponed to February 2021. Antic Clay is planning to raise funds to release an album called "Broom of Fire". It was originally scheduled to be released in 2017 as a 10 year anniversary of the release of "Hilarious Death Blues" (HDB), which is a milestone in the dark americana (or if you prefer gothic americana) genre. Artists and bands are queuing up in 2021. We need to make up lost ground here. Sons of Perdition, Slackeye Slim, Oldboy (of the Fens), Uncle Sinner, Mr Plow and T.K. Bollinger are all working on new albums. Maybe Those Poor Bastards will be added the list. If everything falls into place then next year is going to be a fabulous year. Maybe, the darkest hour is just before the dawn, after all.