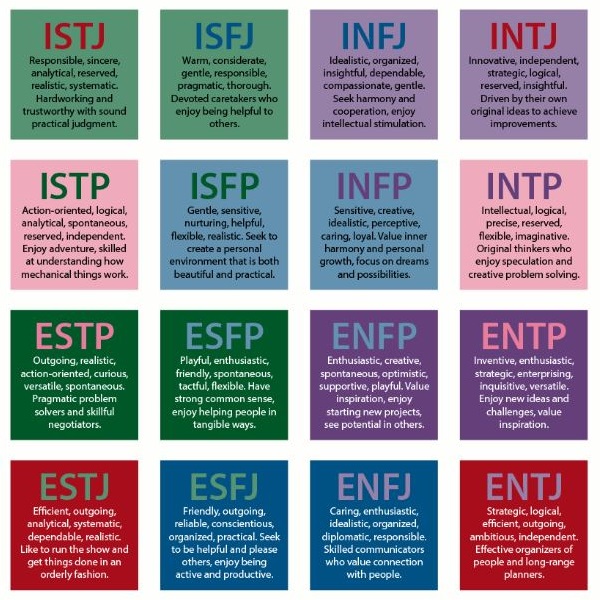 Apparently, goths are introvert. At least according to a popular and widely used personality test. The Myers–Briggs Type Indicator (MBTI) is an introspective self-report questionnaire indicating differing psychological preferences in how you perceive the world and make decisions. Your personality is divided in four categories: introversion (I) or extraversion (E), sensing (S) or intuition (N), thinking (T) or feeling (F), judging (J) or perceiving (P). One letter from each category is taken to produce a four-letter test result, like "ISTJ". Mathematics is science. Four categories and two states is 4^2=16 squares. MBTI isn't science. If all personality types were equally distributed, all types would have a occurrence between 6-7 per cent. Some personality types are overrepresented, whereas other types are underrepresented or even rare. There is no such thing as best or most desirable type. Each type has their own strengths and weaknesses. The Myers–Briggs Type Indicator test has been criticized as pseudoscience. Apart from the questionable self-assessment the facts are disturbing: poor validity and reliability, categories are not independent and the test is not comprehensive. But this criticism doesn't affect its popularity. On the contrary. It seems like the more unscientific a personality test is, the more popular it is, read more here (opens in a new window).

The question therefore arises: why are we prone to believe inaccurate results? The psychologists have three explanations. We want to learn something we didn’t know about ourselves, we want to belong and we want simple ways to understand other people. MBTI ticks in all boxes. Paradoxically, we find new knowledge about ourselves by filling in a form of how we perceive ourselves. Just like a circular argument. An home-made survey found that goths are introvert and intuitive (INFJ, INTJ, INFP and INFP). Well, goths are introspective and sensitive. However, goths comes in many different shapes and forms. You can be a darkly inclined or a happy-go-lucky goth, read more here (opens in a new window). Some people make a clear distinction between goth and gothic music. "Goth" refers to anything affiliated with the subculture, while "gothic" refers to the aesthetic in general, or to a specific style of the music. In the gothic country genre people don't care much about subtle distinctions. MBTI is used in recruitment, putting an effective workteam together or finding your most compatible romantic partner. A test result with a four-letter personality type is a great conversation opener. Pawn is also a four-letter word. A pawn, a person unwittingly used in a scheme and taken advantage of by others, in their game. People are usually not keen to participate in other peoples games. And besides: human beings, especially goths, are too complex to fit in a simple coordinate system.