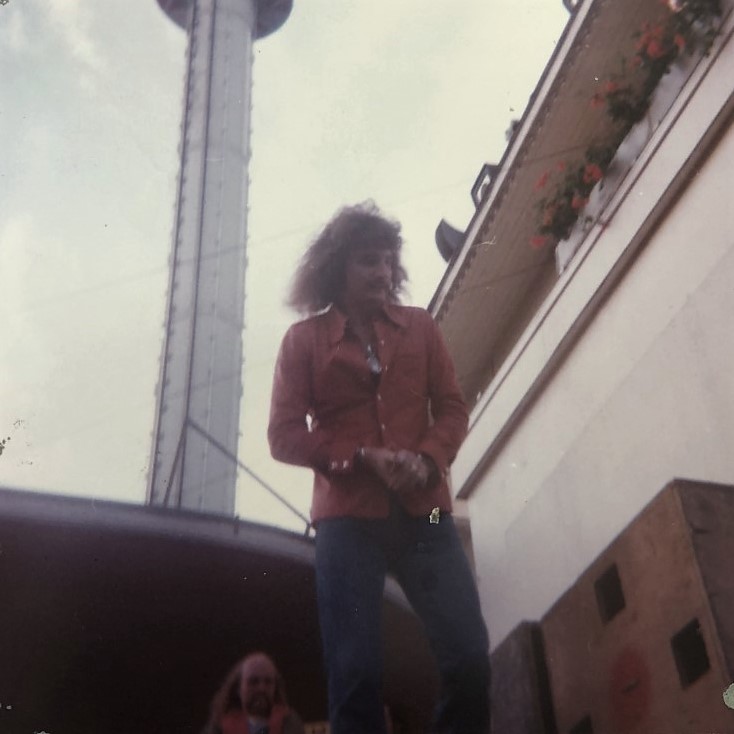 Some memories are etched on my mind. Like that time when I mistook a roadie for Uriah Heep-guitarist Mick Box. What can I say in my defense? Almost everyone had long black hair with center parting and looked like Jesus in 1975. I spent well over a quarter of a film roll on the roadie before I realized my mistake. This was analogue times and film rolls and photographic processing were expensive. You had to choose your motifs and photo opportunities very carefully. I still have a couple of photos left from the concert stored in a cardboard box. However, no photo copies exists of the roadie. I think I threw them away in a state of disappointment and embarassment. The photo on the right is taken by me with my crappy time typical Instamatic camera. The blurry-grainy photo has since then bleached over time and suffered a minor crack damage. It depicts singer David Byron, recognized for his charismatic stage presence. In May 1974 (on the same stage) he was more drunk than usual. The heel of one of his platform shoes fell off and he fell slap-bang into the orchestra pit. His seven feet headlong fall was only slightly mitigated by the flower arrangements. His drinking eventually led to him being sacked from Uriah Heep in July 1976. David Byron died of alcohol-related complications in 1985. Sad story. Uriah Heep is still active. Mick Box is the only member from the band's founding in 1969 who is still active with the group. Looking at this crappy photo brings back memories. Things were quite different back then. It was perfectly natural for children at the age of thirteen to take the commuter train 40 miles on their own to attend a rock concert. Nobody raised an eyebrow. Today you would need a support team nearby texting you every five minutes. The zeitgeist was liberal. In elementary school you were allowed to bring records to the art lessons. One fall day we were pressing watercoloured maple leafs on paper. Uriah Heep's Live (January 1973) was spinning on the turntable. Our middle-aged teacher, who previously had been listening to bands like Deep Purple, Black Sabbath and Led Zeppelin without any enthusiam, suddenly started to think out loud. "This is good. I think I will buy this album to my son". The popularity of Uriah Heep ended there and then.