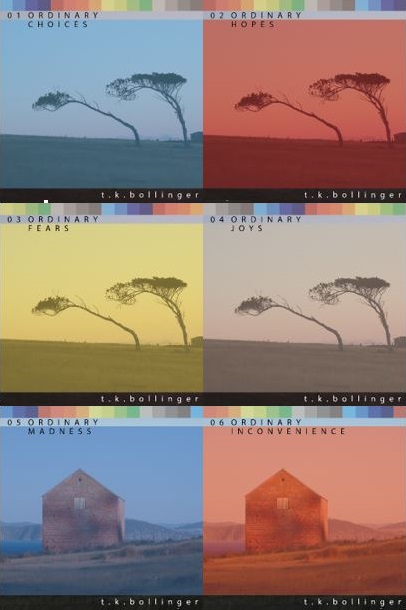 How many musicians in their right mind would commit themselves to release an EP every month during a year? Nota bene, during a pandemic. Well, I thought long and hard but couldn't think of anyone. Not even a desperate musician who wants to get out of a volume based record contract. However, some people go against the flow. In December 2020 T.K. Bollinger announced: "I have good news for you, and scary news for me. I am planning to release 12 EPs next year. One a month. Can I really do this. I guess we'll find out. I'm not doing this on a whim, mind you. I have a whole swag of songs prerecorded, so that part at least is somewhat under control. My hope with these releases is to push as much of my music out there as I can and see what sticks." This, to say the least, ambitious release project will be digital only with a physical release of the best songs as an album in early 2022. You can read the press release here (opens in a new window). Let's do some maths. 12 EPs with 4 songs makes 48 songs (!). The project management triangle states that the quality of work is constrained by cost, scope and time. I don't know about the cost, but T.K Bollinger has delivered according to schedule (scope and time). The quality of the first six EPs will now be assessed. I will quickly walk them through and also take the opportunity to leave unsolicited advice regarding which songs to include on the physical release. T.K. Bollinger wrote a disclaimer; "These songs are an odd bunch. They are grouped thematically rather than stylistically." I couldn't agree more. The songs vary in every conceivable aspect. So, buckle up and enjoy the ride. First out of the EPs was "Ordinary Choices". The opening song "I Can't Keep Singing This Song" sticks out with its catchy beat and rolling rhythm. "Swallow Me Whole" is unadulterated Bollinger-quality. "When I’m gone the light will swallow me whole / All my hopes and all my sorrows / All that I dreamed will be eaten up by the void – / That light will swallow me whole." This song should go straight to the physical release. The second EP is "Ordinary Hopes". The best song is "At Our Best", which may or may not make it to the physical release. The third EP is "Ordinary Fears". The obvious choice here is "Bright Futures" and "Drained of all Hope". The latter song has great lyrics. "Shame might be too light a word / Drained of all hope might fit closer / Shame might be too light a word / Drained of all hope might fit closer." The fourth EP is "Ordinary Joys". It's the weakest of the first six EPs. From this cheerful bunch of songs I choose "Holy Word". The fifth EP is "Ordinary Madness". This is, in my opinion, the best of the six first EPs. The four songs "Ill Comfort, My Friend", "Let Your Devils Take Heart", "Same Breath, Different Face", "Something Real To Hold Onto" should all make it to the physical release. The sixth EP is "Ordinary Inconvenience". From this album I choose "Disappointing Son". Musicians are different. Some musicians oscillate between hope and despair and will never deliver. Some musicians brood over their songs like a mother hen, unwilling to let go. Other musicians have a more simplistic and undemanding approach. T.K. Bollinger belongs to the latter category. In an e-mail he explained: "Some may be misses, but that’s the nature of my creativity. I’m not one to sensor my muse, I take what I can get and see where she leads me." And the overall impression? T.K. Bollinger will not have any problems with material for the physical release. However, there are highs and there are lows. This is expected and consistent with the idea of releasing an EP a month. Adding to this, the songs span over different genres and styles. It's not over yet. There are six more EPs to come (more correctly five EPs, since "Ordinary Loses" was released July 1st). You can check the EPs out for yourself here (opens in a new window). Finally, I admire the effort. The greater the effort, the greater the glory.