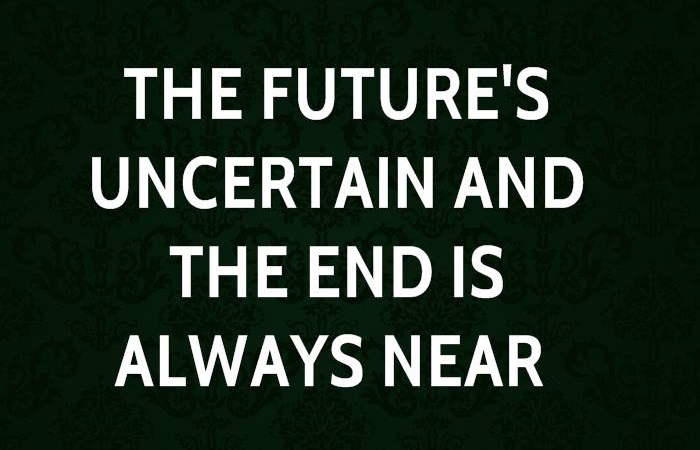 Time to sum up (again). This is my fifth country note since the website was launched in March 2014. Since then, wishes and expectations has gradually turned into disappointments and lamentations. In fact, I'm becoming Ebenezer Scrooge, year by year. However, facts are facts. It's an undisputable fact that the best years for the genre have come and gone. Legendary Doors-singer Jim Morrison sang loud and clear in Roadhouse Blues "The future's uncertain and the end is always near". He was later convicted on indecent exposure and profanity charges. Like if he cared. He had a self-consuming lifestyle. "I wanna have my kicks before the whole shithouse goes up in flames". I live a kick-free life, but I'm still interested in music that knocks me off my feet. When I now summarize the year I can establish that 2018 was a better year than 2017 in terms of quantity. Some facts to back this up: Unhuman Nature" by Those Poor Bastards, "Songs One Through Sixteen" by DBUK, "The Other Shore" by Murder by Death, "The Tighter You Hold Onto Something The More Likely It Will Fall Apart In Your Hands" by T.K. Bollinger, "The Trial" by The Goddamn Gallows, "Transmissions From The Electromagnetic Understream" by Peculiar Pretzelmen, "Gnosis" by Carrie Nation And The Speakeasy, "Chains Are Broken" by The Devil Makes Three and "A Storm To Drive Me Ashore" by Oldboy (Of the Fens). They were all pretty good releases. In terms of quality, 2018 was a equal to 2017. That's something to be thankful for. At least, the quality didn't deterioate. The only album that knocked me off my feet was the re-release of "White Trash Voodoo" by The Woodbox Gang (from 2009, remixed and remastered by Alex Kirt).

Will redemption come to Ebenezer Scrooge (to be)? I've had the same three wishes for three years in a row. The first wish was a new gothic country album from Christian Williams. The second wish was a new album from The Victor Mourning. The third wish was to acquire at least one of the hard-to-find four missing albums (read more here) and to get all albums from the defunct label Devil's Ruin Records. I actually had some luck this year regarding the last wish. I managed to get hold of Damn Laser Vampires (DRR002). One down and only six album to go. Ebenezer Scrooge didn't make any wishes. "Bah! Humbug!" But I wish for the same three things in 2019. What about next year? Antic Clay has declared to release a new album called "Broom of Fire". It was originally scheduled for 2017 as a 10 year anniversary of the release of "Hilarious Death Blues". We'll just have to wait and see if and when it's going to be released. Also, DBUK will release a new album called "Songs Nine Through Sixteen" on January 25th (already released in Europe on a double CD and gatefold double LP). That's basically it. Maybe Sons of Perdition will find time and place for a new album. I hope so. But, the future's uncertain and the end is always near.