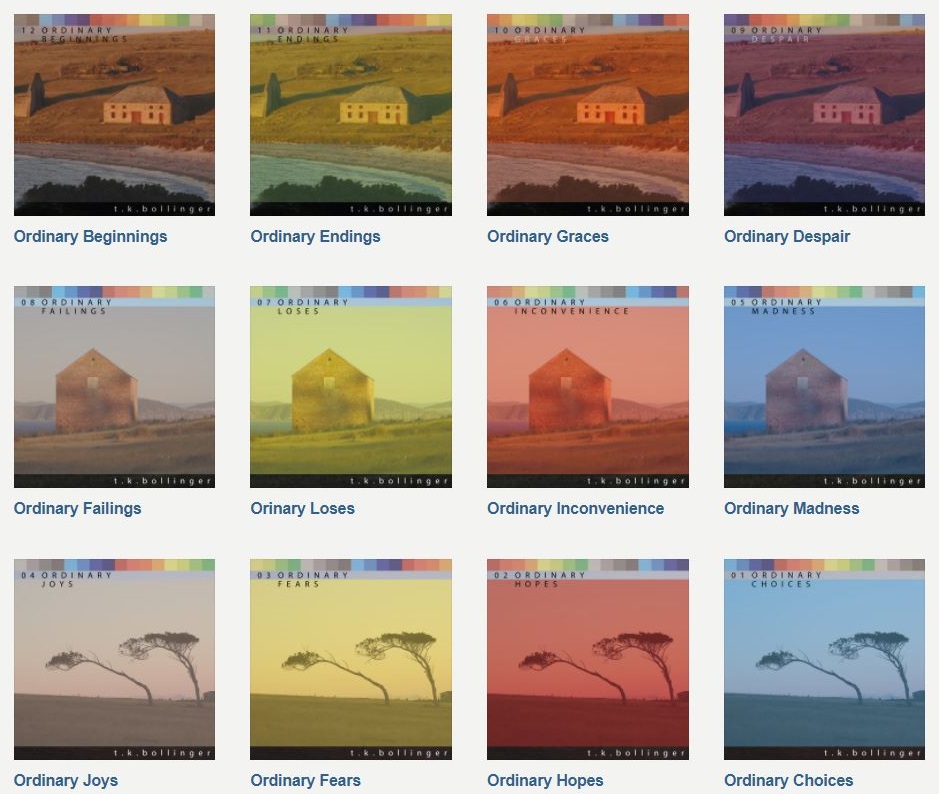 The ongoing pandemic has thrown a wet blanket over musical creativity and output all over the world. When the Plague raged from 1346 to 1353, music was played very little or not at all. The only exceptions were people who decided that since they were going to die anyway, they might as well spend the rest of their life in happiness. In the light of this, maybe the natural thing to do is to commit yourself to release an EP with four songs every month during a whole year, in total 48 songs. Anyway, that's exactly what Australian musician T.K. Bollinger decided to do. A bold decision, perfectly executed. The artists explains: "These EPs are loosely joined by a theme reflected in their titles, that being the ordinary. I wanted to express stories that related to everyone's experience, some dark, some light and many more inbetween." I wrote an appreciative blog post called "The greater the effort, the greater the glory", read more here (opens in a new window). In the blog post I assessed the first six EPs.

The remaining six EPs will now be assessed. I will walk them through EP by EP. The, to say the least, ambitious release project is digital only with a physical release of the best songs as an album in early 2022. I will leave unsolicited advice regarding which songs to include on the physical release. The seventh EP is "Ordinary Loses". The opening song "In Control" is charming with a lot of digital horns, "I have bet my life on control / Yet it still ran rife on control / Sought no body’s respect, left no bodies intact / I thought that I was in control". The second song "Suddenly" will also be a strong contender for the physical release. In this song T.K Bollinger uses his vocal abilities to fullest. Great lyrics, beautiful sung and horns in abundance. But it isn't any horn arrangement in a Bavarian "Oompah" style. The eight EP is "Ordinary Failings". The best song is "God of Small Excuses", but it will probably not stand the competition and make it to the physical release. The ninth EP is "Ordinary Despair". These four songs with horns and strings are ordinary in the usual sense of this word. The tenth EP is "Ordinary Graces". The third song "Walk Like a King" will maybe make it to the physical release. The fourth and last song "Gun Shy" should definitely go straight to the physical release. Great chorus and a one minute long stunning and epic ending. The eleventh EP is "Ordinary Endings". The best song is "The Reason for it All", which may or may not make it to the physical release. The last and twelfth EP is "Ordinary Beginnings". This is, in my opinion, the best of the EPs in the second batch. The first song is "The Joke and the Punchline". "I am the joke and the punchline / The regret and hope that lingers after the dream / I am the voice that says there’s plenty of time / Up until the closing scene / Still unclear of where I’ve been". This is Bollinger songwriting at its best. The third song "From Morning Surban Sunshine" is also a gem and a highlight. The song unfolds slowly and majestic. Everything is great about this song. The fourth song "First Principles" is an excellent album closing song. Vocals and instruments in a perfect combination. "If the choice is one between an aching heart / And insanity, would you walk away, walk away?" The song is like a steamroller. It flattens you. And the overall impression? I could copy and paste my assessment from the blog post "The greater the effort, the greater the glory". It's a winding road. There are highs and there are lows. This is expected and consistent with the idea of releasing an EP a month. T.K. Bollinger philosophy is to shuffle up and deal. This means that some songs are misses, but that’s the nature of his creativity. Anyway, there are more hits than misses. T.K. Bollinger has plenty of songs to choose from for the physical release. You can check out all the 12 EPs for yourself here (opens in a new window). The mission is accomplished. Well done!