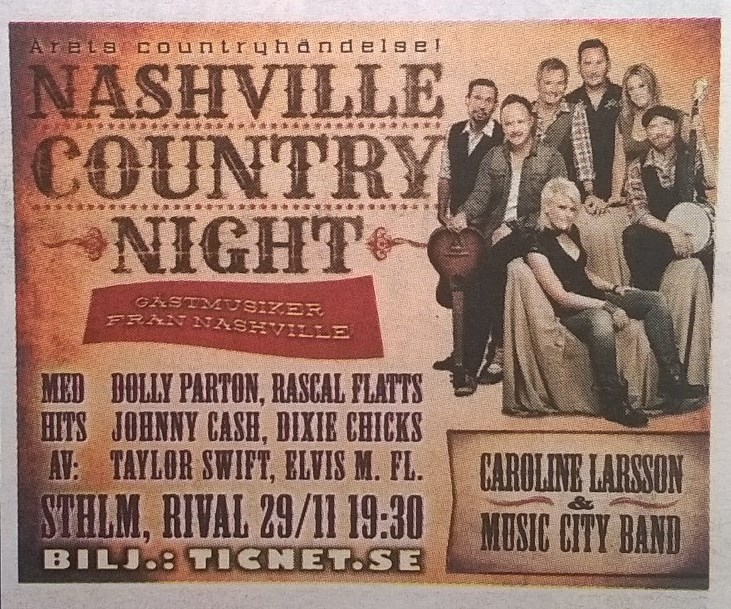 I almost choked on my coffee when reading an advertise in the morning paper the other day. Bluntly presented as "The country event of the year". Yeah, right. By many swedes, November is perceived as the darkest and most unbearable of all months. It's only natural to gild this dark time of the year with a "Nashville country night" on November 29th. A swedish cover band including some unamed musicians from Nashville (maybe the anonymity was a condition for their participation) will be playing hits by Dolly Parton, Rascal Flatts, Johnny Cash, Dixie Chicks, Taylor Swift, Elvis among others. The venue Hotel Rival is placed in the central of Stockholm and, ironically enough, owned by former ABBA-musician Benny Andersson. Hotel Rival is, despite this, a nice place. I can already visualize this: never-ending wailing sessions (that no auto-tuning in the world can fix), dreary arrangements and crowd-pleasing water-downed country with a modern pop twist. That being said, who is really the target group for this "dumb country"? You don't pay for this spectable out of your own pocket. The business concept requires that somebody else pay. My assessment is that not a contemptuous proportion of the target group consists of companies and their employees. It's, of course, a tax deductible activity. In my opinion, they might as well burn the money in a worn-out oil barrel in front of their employees. For what is the upper management really saying to them. In my opinion, they say: "We don't care much for you". Personally, I would go home and review my curriculum vitae. This worst-case scenario has not yet occured (but you if you want peace, prepare for war). Supporting underground country can be compared with participating in a low intense war without any prospect of victory. Still, it's a war that must be fought untiringly on all fronts. Dark night in Stockholm. Trust no one. Enemies are everywhere. Keep calm and carry on.