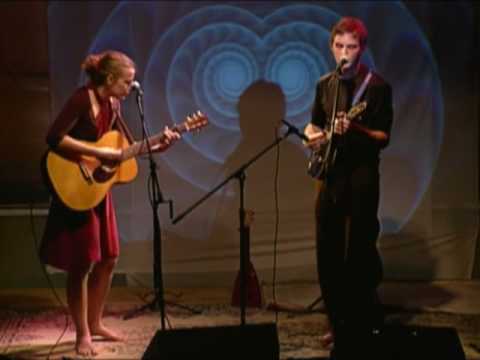 The traditional song "The House Carpenter" has been covered many times. Too many times, if you ask me. One version is worse than the other. The interpretations span from old gutsy sea shanties to torturous singer-songwriter takes. In some cases it's not so obvious. The late Dutch-Swedish troubadour Cornelis Vreeswijk just ripped the chords in his song "Somliga Går I Trasiga Skor" without giving any credit. However, one version stand out: a duet with Gabrielle Louise and David Rynhart from a show in 2009 (if you double-click on the image, a video clip will open in a new window). For what I can tell she plays a Martin guitar (Sustainable Wood Series model) and he plays an Epiphone mandolin (MM30 model). I feel uncomfortable to point this out, but David Rynhart is a wooden-stiff pretty-boy who should have stuck to the mandolin playing and backing vocals. Bear in mind, his vocal parts are supposed to represent a dead ghost or the Devil trying to entice the female protagonist. So what makes this version great? It's Gabrielle Louise, at the time a twenty-four year old woman with tied up hair, barefoot, in cardinal dress. She pulls all the weight. And I mean, all the weight. Her empathy, sensitivity, stage presence, energy level and facial expression are truly amazing. Take a good look. This is how a musician looks like. Her crystal-clear vocal parts represent the female protagonist and cuts through bone and marrow. Read more about the song here (opens in a new window). The last two verses in the song are dark as the night and heavy as lead (even by gothic country standards).

"What hills, what hills are those, my love,
That rise so fair and high?
Those are the hills of heaven, my love,
But not for you and I." [this version: "That you and I must deny"]

"And what hills, what hills are those, my love,
Those hills so dark and low?
"Those are the hills of hell, my love,
Where you and I must go."

The normal thing for me to do would be to thoroughly check out her music and albums. But, I'm afraid of what I might find. I honestly don't care if she later became a mainstream artist. However, I do want this moment to last forever.