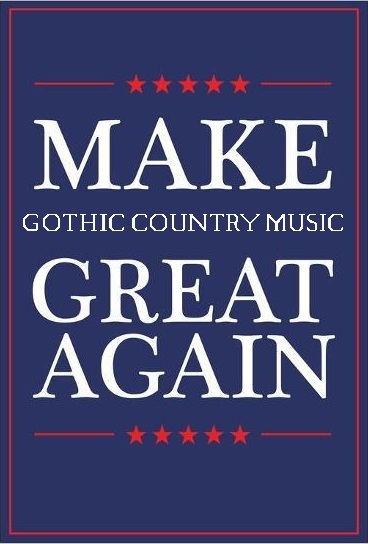 "You look at what’s happening" Trump told his supporters at a rally in Februari 2017. "You look at what’s happening last night in Sweden. Sweden, who would believe this?" Not the Swedes, anyway, since nothing happened that night (or any other night for that matter). I'm more concerned of what has happened in America. More precisely, I'm referring to the decline of gothic country music. It didn't happen over night. It's been a slippery slope for a decade. This sad development wasn't predetermined. America has always been a source of attraction. I really believe in America when it comes to gothic country music. Heritage, culture and talent in abundance. But how has these great assets been managed? America, what is wrong with you? You must make your heart steel. The social media platforms are flooded with artists that you never heard of and, hopefully, never will. Their biographies are written by content marketing editors. It seems like an unproportional share of the artists grew up by a riverbank listening to old-timey music in grandpa's lap. Yeah, right. It's pretty awful to read. I must restrain myself not to explode. A new order is needed. Make gothic country music great again. It's going to be tough. As the philosopher Niccolò Machiavelli realized five hundred years ago "It must be remembered that there is nothing more difficult to plan, more doubtful of success, nor more dangerous to manage than a new system. For the initiator has the enmity of all who would profit by the preservation of the old institution and merely lukewarm defenders in those who gain by the new ones." I have no idea or plan of how gothic country music will be great again. And maybe I'm longing for the old order, not a new order. But, we can start by speaking the truth. "Hello, we play gothic country". No, you don't. "Hello, we are a gothic country band". No, you aren't. "Hello, we are the real thing". No, you are fake. Strong words indeed, but I had to say it. Thruth will set you free.