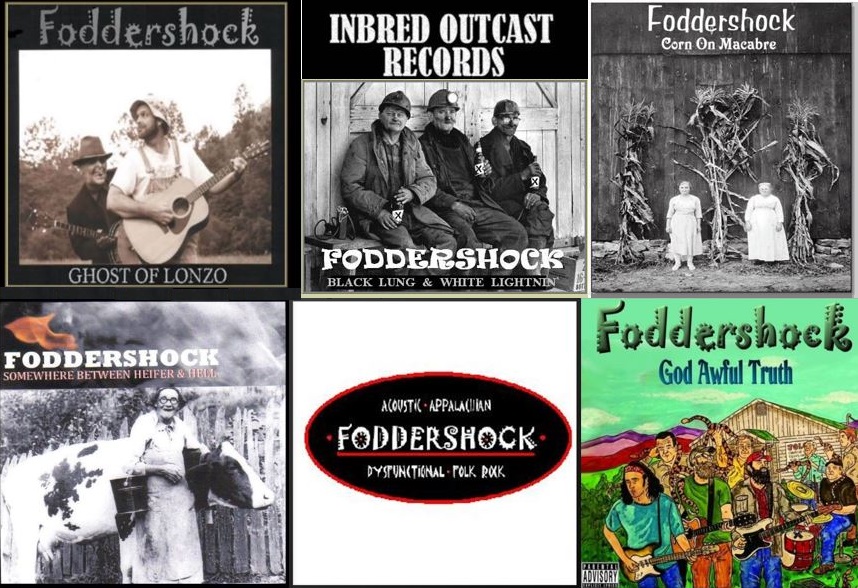 Foddershock are based deep in the coalfields of southwest Virginia, in the small town of Clintwood in Dickinson County. They are an obscure band whose artistry is heavily influenced by the four D's...the Devil, Drugs, Death, and Dysfunction. They have self-produced and self-released nine albums on their very apt "label", Inbred Outcast Records. I have managed to get a hold of four of their albums: "Roadkill Expressway", "One Good Eye", "Inbreds From Outer Space" and "Sordid Details Of The Human Condition". I don't mean to blow my own horn, but this is quite of an achivement since the difficulty level is ridiculous high: self-released cd-r albums sold locally and I live 7 064 km (4 389 miles) from the local market. Five albums are still missing in my collection: "Ghost Of Lonzo", "‎Black Lung & White Lightnin'", "‎Corn On Macabre", "Somewhere Between Heifer And Hell" and "God Awful Truth". There are no digital releases or streaming. I would like to write an article about Foddershock, but since I haven't listened to all of their albums, I'm afraid I would not do them justice. However, some bits and pieces are uploaded on Youtube, for example "Die In Jail" from "Corn On Macabre", "Dyin' To Make A Livin'", "Mountain Misfit" and "Searchin' For The Cure" from "‎Black Lung & White Lightnin'", "When Coal Was King" and "Evil Ways" from "Somewhere Between Heifer And Hell". Collecting rare cds and cd-r is hard work. Normally, I use several search methods. Systematic and random trawling is one of them. Monitoring through wantlists, wishlists and saved searches is another. Contacting, stalking and harassing people is a third method. In this case I probably have to add a fourth method: getting feet on the ground. Fly overseas, rent a car and drive to Clintwood, VA and not leave until I have found a copy of each and everyone of them. This coincides with an unfulfilled dream I have: a road trip from coast to coast. However, this roadtrip doesn't include any tourist attractions or scenic views. This roadtrip goes through the deep dark underbelly of America.