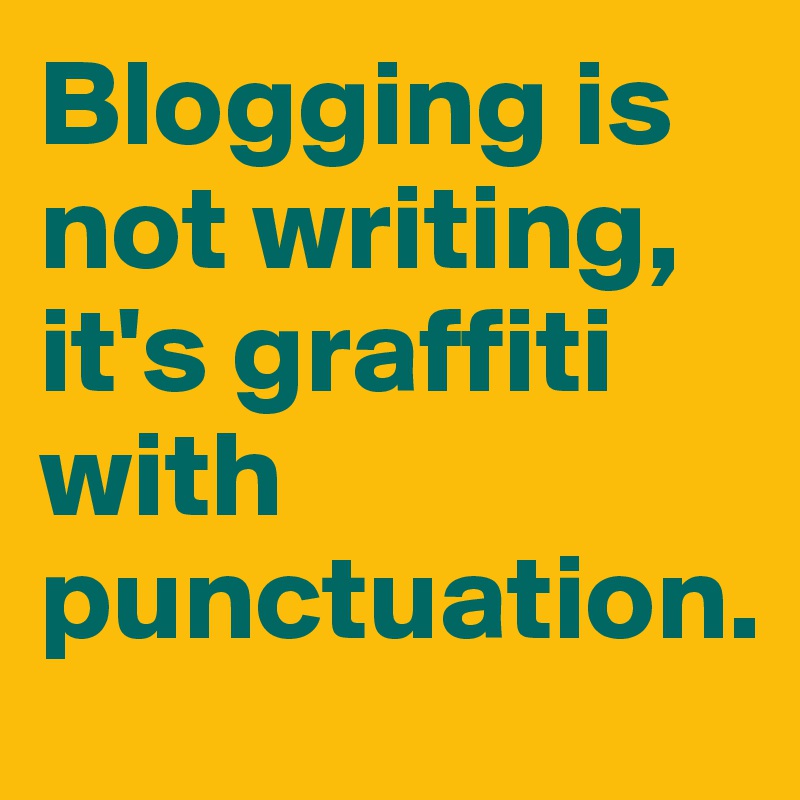 I recently watched Steven Soderberg's movie Contagion on Netflix, where Elliot Gould's character (a scientist) tells a blogger, played by Jude Law, that: "Blogging is not writing, it's graffiti with punctuation." Ouch. This was hurtful for three reasons. I write blog posts. I don't care much for graffiti. The English language isn't my mother tongue. I probably create the most terrible graffiti imaginable using a linguistic spray can rack. Littering, actually. Then I snapped out of self-doubt and asked myself: is this the brutal truth or just nonsense? Let's take a closer look at graffiti with punctuation. In another blog post I wrote(?) that the written word was dying or at least was in sharp decline. The blunt quote contains a grain of truth. Some blogs are characterized by poor grammar, diction, syntax and lack of editing. However, many blogs have other problems. Putting your thoughts into words isn't automatically a good idea. Better to remain silent and be thought a fool than to speak and to remove all doubt. Blogs about mundane family life, food, training and excercises and blogs referring to other blogs are the worst. You will also be surprised of the absence of written text. It's great when you come across a text which contains one main and subordinate clause.

This little project of mine with the mission statement "to explore and promote gothic country, southern gothic, gothic americana, american gothic and dark americana and ...whatever" is an opportunity to brush up my schoolbook English. The blog is one-way communication and an integrated part of the website. I have the privilege to write impertinent notes without being refuted. I don't exclusively blog about gothic country music. I also blog about fragments of memories, observations, trends, phenomena and nonsense. The blogs are filled with ranting, dissing and crusading. In short, grumpy-old-man behavior. The blog posts are, in contrast to the articles, not search engine optimized (SEO). Clearly, there's a limit for my vigour and diligence. Hopefully they will be read anyway. I spend time on each blog post: researching, writing, editing and searching for a fitting image or even creating one myself. I think it is worth the time spent. Personally, I have the greatest admiration for people who have a special interest (however obscure), are dedicated and passionate, have something to say and can express themselves. Why not in a blog. Blogging could actually be writing.